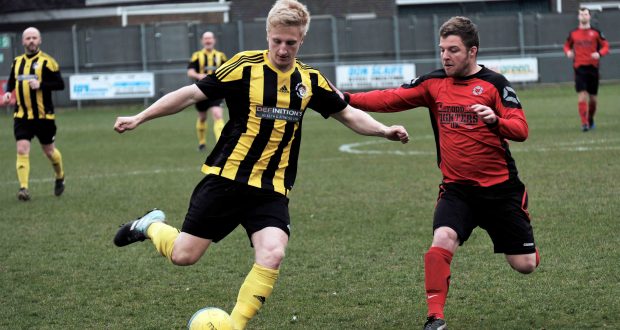 In a battle that was expected to be close, goals from Reece Crane, Danny Firth, Corban Oldham and sub Harry Grigas shot down the Magpies at Snowden Field.

In the same division, Holbeach United Reserves stretched their unbeaten start to the league season to nine games with a 1-1 draw at Uppingham Town.

Jordan Keeble’s strike made it six draws from nine matches for the Tigers, who sit seventh.

In Division One, ever-improving Tydd continued their resurgence by battering Moulton Harrox Reserves 5-1.

Jamie Mills and Matthew Rose both scored in the first half as the rivals were locked together at 1-1.

But Bradley Easey (2), Jamie Steward and Timmy Magnus all netted after the interval to give Tydd a fine derby win.

They are now fifth, with Harrox falling down to ninth.

There was better news for Long Sutton Athletic, who picked up a 3-2 victory over Huntingdon Town Development.

The victory moves them into the top six.

Down in Division Five, Sutton Bridge United remain top of the pile after a 3-1 victory over Weldon United Reserves.

All three of the goals came from Kurt Scott, as Sutton made it seven wins from nine games.

At the other end of the table, Holbeach Bank suffered an 8-1 humbling at Oundle Town Reserves as both sides had players sent off.

Joshua Grainger got an early goal for Bank, but it was all downhill from there – including a red for Ashley Carress (two yellow cards).