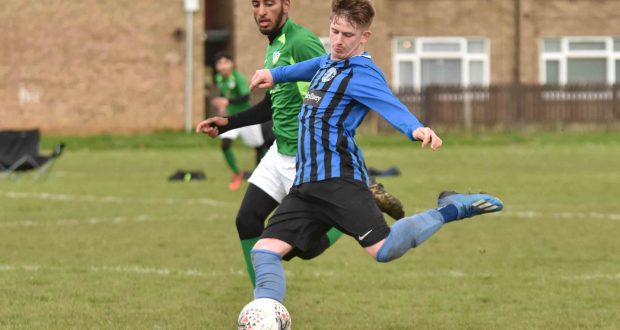 ON THE MARK: Dec Earth. Photo by JAKE WHITELEY

Patterson pleased as Moulton Harrox bounce back with Leverington victory

Co-boss Bobby Patterson praised his Moulton Harrox side as they bounced back from last week’s defeat with a routine 4-0 victory at Leverington Sports on Saturday.

Goals from Declan Earth, Joe Townsend and Alfie Woodward all found the net to put Moulton 3-0 to the good at half-time in the ChromaSport PDFL Premier Division clash, before Ian Bradbury wrapped up the win after the interval.

Having lost to Oakham United last week, the win still leaves Harrox – now fourth in the table – some 11 points behind leaders Uppingham Town with a game in hand.

Patterson isn’t expecting his side to be able to reel them in, but wants his side to discover some consitency to keep them in the mix for both the league and Lincs Junior Cup trophies.

“We approached the game in the right way,” said Patterson, who is joint boss alongside Tim Cole. “The attitude was right and we pretty much had the game won by half time.

“It’s good to get a clean sheet and score four goals, but I’ll not be getting too carried away.

“Leverington offered a threat going forward, but with respect, they are near the bottom for a reason and we won quite comfortably.

“We’ve not be consistent enough to stay in touch with the top two and they are quite far ahead now.

“I’m not sure they’ll drop enough points for us to catch them, but we need to be consistent and keep them honest.

“I’ve told the lads that we’re targeting the Lincs Junior Cup and that they need to fight for their shirts to play in that competition.”

Moulton are back at home this Saturday when they welcome sixth-placed Oundle Town (2pm), before hosts Lincoln Moorlands Railway in the county cup the following week.