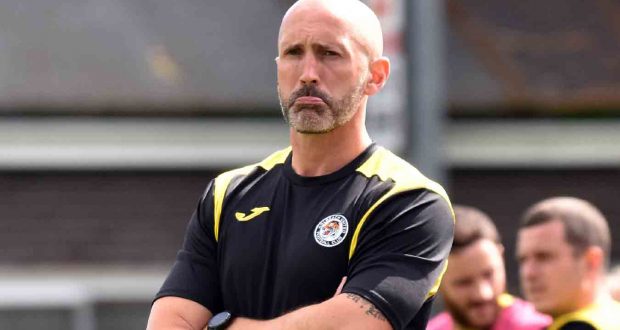 END OF THE LINE: Danny Hussey. Photo by JAKE WHITELEY

Last week’s decision to end the non-league season means that Danny Hussey is no longer the manager of Holbeach United.

Having announced his intention to resign at the end of the season just weeks before the coronavirus crisis stalled the entire sporting scene, Hussey is now leaving the role earlier than expected.

He was confident that his Tigers, fifth when the season was stopped, would finish in the top three of the Uhlsport UCL Premier Division – and they also had a KitmanUK League Cup final to play.

But Hussey feels the FA have made the right decision – even if it means ending his Holbeach journey earlier than he would have liked.

He said: “I’m sad for the lads and the club that we didn’t get to finish our journey and Rob Ward, Tim Cole and myself really wanted to push these boys to the end.

“I’m leaving the club a proud fan, manager and friend of so many Holbeach folk.

“Having grown up there I loved going back and being involved in the family atmosphere the club has.

“Whoever the new management team coming in are, they will be inheriting a great team, atmosphere and family – and I really hope the lads stick together.

“The club is on the right path. They are financially secure with an amazing youth set up that runs through to the brilliant under-18s.

“In senior football, the club boast three sides including the A team, reserves and first team.

“Rob and I will remain Tigers fans and I intend on coming over and supporting them when I can. I have let Des Ford and Dave Dougill know that I’m on the phone should they need any support with anything.

“It’s a shame things ended this way, but it’s the right decision. The most important thing for all those clubs and managers who are moaning about the decision is to consider the fact that playing would be jeopardising the health of our volunteers and fans as some of these people are in that vulnerable category.

“Instead, they can ask them to stay in, self isolate and get ready for their football fix next season – if there is a next season.”