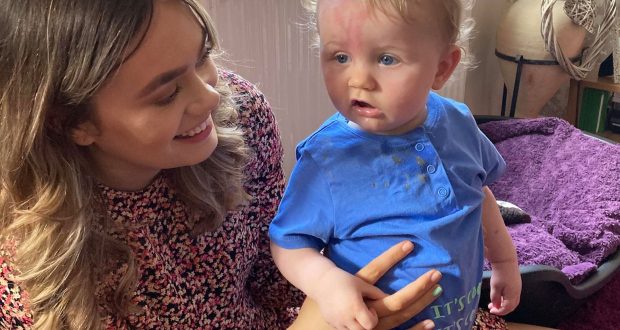 An eight-month old who underwent a rare brain operation to disconnect half his brain is doing “better than ever imagined”.

And coincidently Oscar Wright came back home to Crowland and was reunited with his mum Bethany Rollings on Sturge-Weber Syndrome Awareness Day (June 27).

Due to COVID-19 restrictions, only dad Tim Wright was allowed into Great Ormond Street Hospital in London where their little man has been since mid-June.

Nana Gemma Niemiro said: “He is doing amazingly and literally has coped better than we could ever have imagined.”

The operation was described as “the only hope” by Oscar’s family after he developed more serious epileptic episodes as a result of the Sturge-Weber Syndrome he was born with.

That he came out on the condition’s awareness day was particularly pleasing for the family and mum Bethany.

She said: “When it was all confirmed by Oscar’s first 40-minute seizure back in November when he was only nine weeks old, our lives were turned upside down.

“They’ve been upside down since. Despite everything, he has taught me to love unconditionally and be strong when you have no choice.

“Watching him suffer and have no control is the hardest thing but everybody loves him so much and he is the loveliest boy ever.

“Every child with Sturge-Weber is different and we shall see how his condition effects him throughout his life.

“What I do know is he has helped to spread awareness across my friends and their friends and so on and for that I’m so happy.

“He is so special and so brave. We wouldn’t change him for the world.”