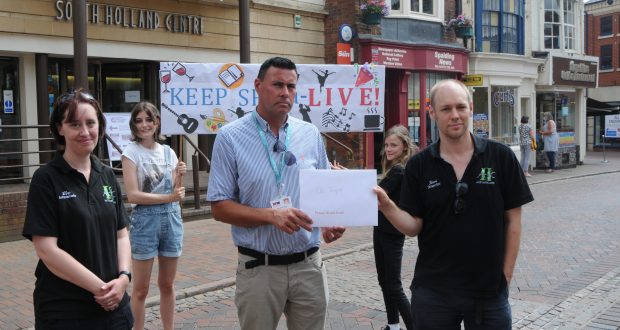 Liz Hallissey and Karl Gernet of Act II present Coun Gary Taylor with the letter on behalf of 26 groups that use the South Holland Centre. Pictured in the background is Molly Hallissey (left) and Rosie Hallissey (right).

Around 100 people descended on Spalding Market Place this lunch time to show their support for the South Holland Centre, the staff for which are subject to redundancies.

Operators South Holland District Councils say the number of roles at the centre is being reduced from 24 to seven and the loss of many of the technical staff has led to worries from arts groups they could struggle to put shows on.

They’ve called for more transparency over the venues future with groups being unable to book their usual shows despite films now being shown.

A Facebook group ‘Keep SHC a-LIVE’ organised the ‘Clap for Live’ for staff and the centre today at 2pm as that was when the time the first film was being shown.

A video of the event can be found here.

Following that, a letter signed by 27 different groups outlining their concerns was presented to South Holland District Councillor Gary Taylor.

Liz Hallissey of Act II was one of the organisers. She said: “We’re absolutely delighted with the turn out.

“We’d no idea how many might come especially as its in the middle of the working day, but we’re really pleased.

“There was a real range of people there from a lot of different groups and some who we’d not seen before which is great as it means word is getting out.

“We’ve had some very positive conversations with Coun Taylor and hopefully the council understands the strength of feeling there is over this issue and the concerns many of us have.”

Karl Gernert, also of Act II said: “There’s a lot of groups this affects and we’re not getting any answers. It’s not just the theatres. There’s the function hall and the catering.

“The front of office was a tourist information and sold tickets for a host of shows, but now it’ll only be open when the centre is showing films.

“Yes it’s great they’re showing films but it should be for other events too.”

To whom it may concern,
Thank you for taking the time to read this correspondence. The purpose of this letter is to
voice the concerns of the signatories below regarding the proposed restructuring of the
South Holland Centre.
As you will see, this letter is on behalf of a wide range of regular hirers and users of the
space. Many of us have seen the document regarding the reduction of non-casual staff
down to six members, four of whom are part-time. As a result of the wide breadth of
content we have created in, for and with the SHC, we are struggling to see how the
proposed structure can meet the needs which the building exists to provide.
Alongside this letter, you will see our document entitled Service, Safety, Support, which we
believe encapsulates the purpose and the potential of the building. We hope that you will
agree with our assessment of its necessity.
The main operational concerns we have are as follows:
 No dedicated technical staff (previously 3 posts, now 1.75 posts technical and ops)
 No dedicated marketing staff (previously 1.5 posts)
 No dedicated front of house duty managers (previously 3 evening staff, plus a large
part of the ‘Operations Manager’ job, plus casuals and the other staff members
getting involved during peak times, such as panto)
 Only 2 part-time box-office posts – only enough to cover part of the week
 There is currently no catering service
 Volunteer team of 50 have not been kept informed of reopening plans and consulted
regarding recommencing their roles
 Manager post not replaced since December and has been downgraded
 SHDC still saying it will deliver Arts Council commitments this year, for which we
believe the Council receives around £50,000 for live events and marketing.

In addition to the above, we find it disheartening and difficult to believe that a large Council-
owned and Council-run building in the heart of the town is not being utilised as a cultural
and community hub in the way it has been shown to be in the past. The often busy café bar,
the designated Safe Space, the Tourist Information facility and many other aspects beyond
the arts and live events remits are tangible examples of this, though there are many more.
Following on from this, the high number of South Holland residents who do not use social
media are being left uninformed and under-informed about the facilities currently on offer,
and only people who are computer literate can book tickets in advance. This, tellingly, is in
part due to a lack of personnel who could provide this information, for example by
telephone or in person at the box office.
Let us be clear, we are not aiming to disrupt the operations of the SHC, but we are highly
concerned that the current model being proposed is inadequate and insufficiently thought
through to be able to make the SHC what it is required to be. Furthermore, the lack of
clarity and transparency in this matter so far is leading many to conclude that an additional
agenda is at play and there are further potentially damaging changes afoot that are yet to
make themselves known. Some clarification on this would be welcome.
We are genuinely interested in your thoughts and your response to the points we have
outlined above. We look forward to hearing from you.
Signed,