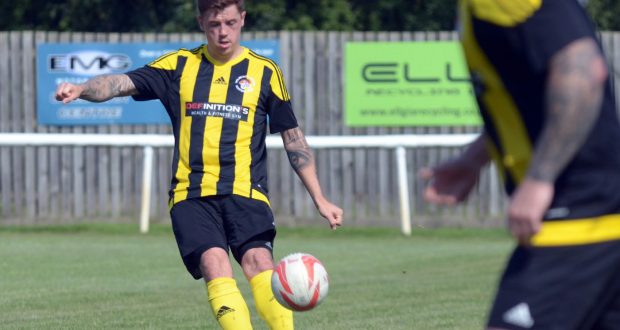 RETURN: Stacy Cartwright is back in the squad. Photo by JAKE WHITELEY

Nothing but three points will do for Holbeach United at Kirby Muxloe on Saturday.

That’s the verdict of Tigers boss Seb Hayes, who knows that his side face three ChromaSport UCL Premier Division Christmas crackers after the trip to Leicestershire.

Holbeach go into Saturday’s game (3pm) in second place – a position they want to hold ahead of fixtures against fourth-placed Deeping Rangers (home, December 23), fifth-placed Wisbech Town (away, Boxing Day) and leaders Newport Pagnell (away, December 30).

Hayes feels the three festive fixtures will define his side’s season, but knows that anything other than a victory at Ratby Lane this weekend will throw a spanner in the works.

“We’ve got to win on Saturday to set up the Christmas games,” admitted the Holbeach boss. “We know we’ve got the toughest Christmas fixtures of any of the leading sides.

“We have a target points-wise for those three games, but obviously anything other than a win against Kirby Muxloe would make our task even harder.

“Kirby are a difficult side to play away from home. We beat them at home at the start of the season at our place, but I remember losing there last year.

“The game comes before two derby fixtures and the Pagnell match. I always feel that you start to get some funny results around this time of year, as some players don’t look after themselves properly.

“We have to be bang on it and make sure we come home with the points.”

Holbeach are boosted by the return of the versatile Stacy Cartwright on Saturday, while defender Joe Braithwaite will also be involved after agreeing a return to Carter’s Park.

Midfielder Joe Smith should also be fit to return to the squad, but Matt Warfield is facing a spell on the sidelines after damaging ankle ligaments in to Lincs FA Senior Trophy semi-final victory at Bourne Town on Wednesday.

Charley Sanders also serves the first of his three-game ban after his costly red card in the 1-1 draw against Rothwell Corinthians last weekend.

Holbeach, who are eight points off the top with two games in hand, go into the game on a run of five games unbeaten in all competitions.

Despite being 11th in the table, Kirby Muxloe have won seven of their last nine games and triumphed in each of their last three home games – scoring at least three goals in each match.