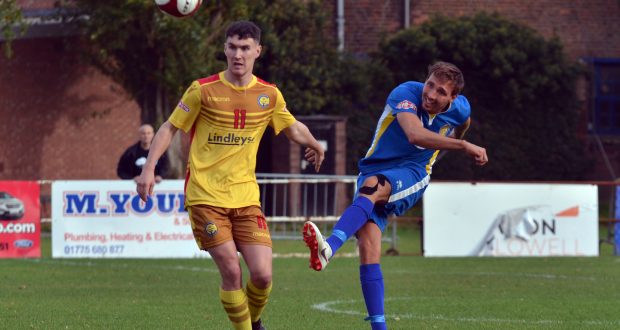 Norris struck on 11, 19 and 72 minutes at a wet Sir Halley Stewart Playing Field as visitors Lincoln jumped up to second in the Evo-Stik NPL Division One East table.

The Tulips, who had new signing Liam Marshall – a left-sided defender from Peterborough Sports – on the bench following his move to the club, remain in 16th after the loss.

The city visitors adapted better to the slippery conditions and put the Tulips under pressure from the outset – and they were chasing the game after 11 minutes.

Goalkeeper Michael Duggan got a solid hand to a stinging effort from Paul Grimes, but Norris quickly pounced on the loose ball and drove it firmly into the net from close range.

The Tulips had a slight chance to level the scores five minutes later when James Hugo won a free kick, but Jack Brownell’s shot was always rising over the Lincoln crossbar.

The visitors attacked relentlessly down the wings and it was from another penetrating cross which Norris gleefully drove in in the 19th minute.

The Tulips’ first meaningful shot from open play did not arrive until the 34th minute when skipper Ben Davison’s low-struck effort was safely gathered by Michael Emery.

The Tulips featured more after the break. Leon Mettam, who had replaced Luke White, burst through to get within striking distance but was judged to be offside.

Shortly afterwards Mettam again worked a passage through a packed defence but was unable to trouble Emery.

Then Davison homed in on a neatly threaded pass by Hugo but fired inches wide.

But the 72nd minute brought Lincoln’s third goal to put the game out of the Tulips’ reach.

Once again, Norris was on the end of another cross from the left side to give Duggan no chance from close in.

The Tulips did feature well in the closing quarter of the game but failed to get the consolation goal they probably deserved.

It was Spalding’s contribution to mark the centenary of the Armistice and the end of the “war to end all wars” and all of those heroes who perished, by observing a minute of silent tribute.

As both sets of players and match officials lined up on the pitch in front of the club officials and many supporters, who stood in silence on the touchline, local musician Katy Jeffery played the Last Post and the words from “For the Fallen” by Robert Laurence Binyon (1869-1943) were read out by Alan Rayner.

After one minute of silence the stadium was filled by prolonged applause.