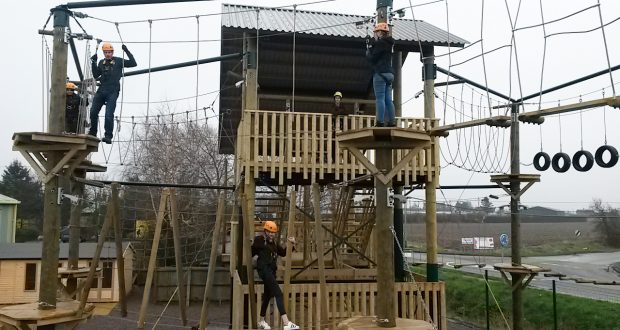 Owner Albert Slator said: “We wanted to do something different. From Easter through to November we are a little bit quieter as an indoor facility.
“We feel this is a good investment to keep us evolving and offering new things both to existing and new customers, including grown ups. The minimum age for this is seven but adults and adult groups can also have a go.”

It had originally been hoped grant funding to support tourism related job creation projects in rural areas would help support the project, but that wasn’t ultimately pursued.
High Ropes has taken the place of an overflow parking area which was previously an outdoor play area. Inside  bowling lanes have gone to make way for extra seating.

High Ropes will be open weekends and school holidays from Saturday, March 25 to the end of October half-term. Term time visits are available but must be pre-booked.
Cost (age 7-adult) is £12.49 for an hour.

REVIEW
Tick number one for High Ropes is its rope roller continuous belay system – once you’re harnessed up and connected to the high wire you’re safely attached right to the end with no need to clip on and off, writes Louise Chapman. That’s a big plus compared to other similar courses I’ve tried, particularly when taking part with children.

The circular course has 24 elements over two levels, one 3m off the ground and the other 8m. The hour-long period covered by the ticket price is easily enough to try both.

I expected the lower level to be the easiest. In fact, I found its handrail-free log beam and horizontal climbing wall traverse to be two of the most daunting and tricky obstacles – and especially good fun.

The course is relatively compact compared to other high ropes you may have experienced, but the circular nature of it makes the most of the space and there’s still more than enough to make it absorbing and engaging. It was only towards the end that I remembered to have a look across the surrounding fields, having forgotten where I was due to being so focused on the experience.

When my seven-year-old made it all the way around the lower course, both he and I were delighted. A couple of moments of wobbly confidence were brilliantly dealt with by the responsive instructors, who, as well as quickly offering much-needed encouragement, also gave practical tips to help him attack the tougher obstacles. It was due to my cautiousness rather than his that he didn’t take on the higher level course too – he may have managed that just as well.

For adults with past experience of high ropes courses this one is still fun and for those with less experience or who are more nervous at height, it is more than enough to offer a real sense of challenge and accomplishment. For children it’s a fantastic  opportunity for them to see their own ability to face and overcome fears.
2017-03-15
Nigel Chapman