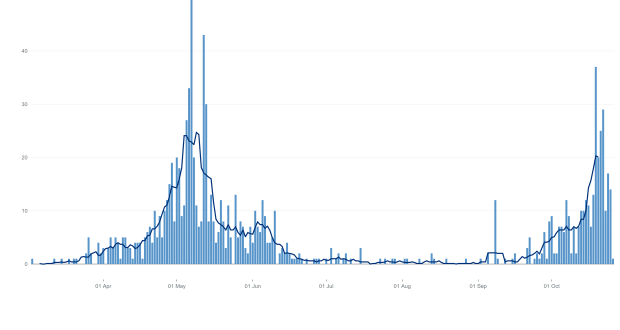 South Holland and the Deepings MP Sir John Hayes has urged against lockdown restrictions for the area as COVID-19 cases continue to rise.

The Voice understands local care homes are also being affected by outbreaks.

Like much of the country the area has seen an increase in cases in recent weeks, though not as high as elsewhere.

After South Holland only had isolated cases throughout much of the summer, in recent weeks numbers have risen steadily according to government statistics.

The 37 confirmed cases on October 19 in the district was the third most in a single day of the pandemic and highest since May 12.

The latest seven-day figure for number of cases from October 22 was 142 up from 124 for the previous seven days.

The total number of deaths recorded with COVID-19 as a factor in South Holand stood at 58 as of Wednesday, October 28, an increase of four from last week, though three of those deaths were in the last two days.

In Lincolnshire as a whole, from October 1 to October 21 cases rose from 3,287 to 5,223, deaths rose from 151 to 160 and the number of those in hospital from nine to 34, a meeting of Lincolnshire Clinical Commissioning Group (CCG) has been told.

The number in hospital is likely to be much higher now after Pilgrim Hospital announced on Tuesday it had closed off three separate wards after an outbreak there.

“We have a number of patients and staff who have tested positive for COVID-19 at Pilgrim Hospital, Boston across three separate wards, and on each ward we believe the cases may be connected.

“Therefore, we have restricted admissions to the wards to ensure this is contained and does not impact on other staff, patients or services.

“Anyone with an appointment at the hospital should attend as previously arranged. If you are concerned please contact the relevant department.”

In a column written for The Voice, Sir John Hayes has warned against lockdown restrictions.

He said: “A blanket approach, treating Lincolnshire in the same way as worst affected areas like Liverpool or Nottingham would be unjust, ineffective and self-defeating.

“It would make no sense for measures to be imposed here of a kind necessary in places with much higher case numbers, many more hospital admissions and more deaths.”