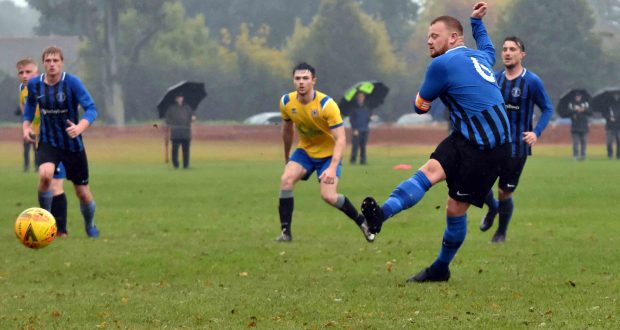 Moulton Harrox continued their perfect start to the ChromaSport PDFL Premier Division season with a 3-1 win over Stamford Lions on Saturday.

Two first-half penalties from skipper Billy King and a clincher from sub Ian Bradbury sealed a third win in as many games for Harrox in what was their first home fixture of the season.

Assistant manager Bobby Patterson was happy with what he saw from his side, but he admits they benefitted from a soft early penalty.

“It was pretty comfortable for us,” admitted the number two. “It’s three more points, which is all that matters.

“They came with a plan of sitting behind the ball and making it difficult for us.

“But we got lucky with a very harsh handball early on – I’d not have been happy if it went against us. Billy stepped up and did the business, then we had another more clean penalty for a foul on Andy Law.

“After that, Lions didn’t change their tactics at all and I think the lads got a bit frustrated. At 2-0 you want to go forward and get more goals, but it wasn’t easy.

“We switched off a bit and an individual error at the back let them pull one back.

“Thankfully, Ian Bradbury went straight up the other end and put in a third.

Next up for Harrox is an away date at Kirton Town on Saturday in the Lincs Junior Cup (1.30pm).

The county competition is Harrox’s only crack at a cup this season and Patterson wants his side to go deep in the competition.

He added: “It’ll be a physical game, they always are against Boston League sides. In the PDFL, we are lucky that we’re able to play football – games in this competition are always a physical test.

“Our aim is to go as far as we can. Kirton look to have an experienced side and it won’t be easy.”