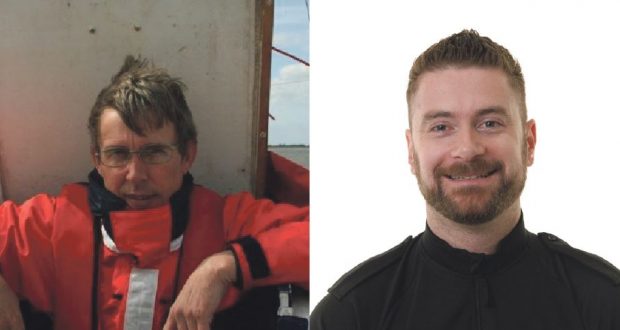 Motorist thanks those who saved his life

A man who was left upside down in a ditch in freezing water after his car overturned on his way to work has thanked the emergency services who saved his life.

Police officer, PC Phil McAllister, jumped into the water and smashed the window of David Anthony’s car to rescue the 60-year-old from the freezing cold water.

David, of Glenside, West Pinchbeck, was on his way to open up the Dalehead factory in Spalding when his car hit black ice at 4.52am on Monday (December 7).

His vehicle left the road shortly before the level crossing on Cherry Holt Lane in Pinchbeck landing upside down in a 12 foot deep ditch.

It left him completely trapped, but he did have one arm free to ring 999 and the emergency services were there within 20 minutes to pull him from the frozen water which police told him would have been around -6 degree Celsius.

“Without their actions I wouldn’t be here now,” said David from home where he’s recovering and still feeling sore following the incident. “It was a pea soup fog and freezing cold.

“I always use the back roads from that direction but was driving really slowly because the fog was that thick.

“After coming around the 90 degree bend before hitting the level crossing, my car went across black ice and it started to slide towards the dyke.

“I hit the brakes but they didn’t do anything and tried to correct the slide but the car didn’t respond until it was too late.

“The car rolled over, but I didn’t realise I was upside down until I released my seat belt and fell on to the roof.

“I had one hand keeping me up but in the water and one free hand to make the call.”

The police kept David on the phone as officers searched for him in the pitch black and it was his shouting that directed PC McAllister to the scene.

“He was then next to me and told me to cover my eyes as he had to put the window through to get me out,” continued David who has called for PC McAllister to receive a commendation for his actions. “He was heroic, absolutely brilliant in being alongside me all the time until I was safe.

“I was frozen at that stage and still didn’t know how I was going to get out, but then straight away the ladder from Spalding Fire Crew came down.

“A couple of their crew were also wet and had jumped in too.

“The two ambulance blokes were fantastic too.

“I don’t know how they all got there so quickly and they got me warmed up and stopped me from going hypothermic.

“Without the combination of all of them it would have been a completely different story.

“I’m trying to find out all their names so I can buy them a cream cake to say thank you.”

David is thought to have escaped injury but is feeling pain and being looked after by wife Louise.

He says it took him six hours to thaw out.

“My family have been very worried about me but I’ve been touched by their kind well wishes and those of friends and colleagues,” he added.

Lincolnshire Police chief inspector Dave Plumb said of his officer: “PC McAllister put himself in danger to save a life, which illustrates that public safety is and will always be our number one priority.

“We’d also like to take this opportunity to remind the public to please be careful and to remember to drive to the conditions of the road.”