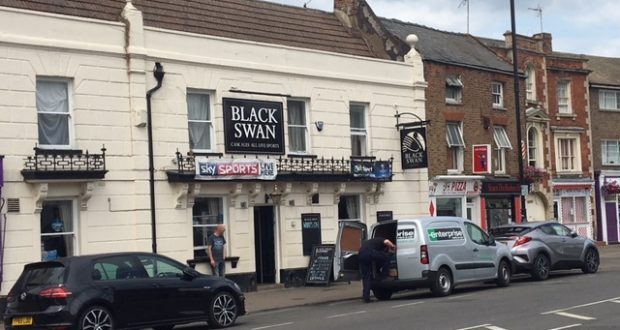 A Spalding pub’s licence will again come under threat when Lincolnshire Police’s bid to revoke it goes before the council after evidence of drug use was again found on the premises.

The Black Swan in New Street faced its first licence review probe in 2011 and in May 2018 went before the South Holland District Council Licensing Committee. A number of conditions were imposed during the hearing.

However, a police visit in July 2019 revealed “readings indicated that controlled drugs are regularly being used on the premises”, according to the licence review application by Chief Constable Bill Skelly.

The SHDC reports pack for today’s (Thursday) meeting states that “Lincolnshire Police believes that there is a lack of promotion of all four of the licensing objectives.”

The police application suggests revocation of the licence “should be seriously considered”.

The application includes details of the drugs itemiser findings, which included readings of cocaine on 16 of 25 surfaces tested, with the highest readings found in the gents’ toilets and the games area bar.

Complaints made by police in the application include a CCTV system being in place but with no record or log book, as directed by the previous licence hearing conditions; no drugs policy was available to view; evidence only one staff member was trained in relation to drugs following the 2018 hearing; door staff employed during “peak times” – a term the police question.

Registered business ‘The Black Swan Spalding Ltd’, which is owned by premises licence holder John Parr, went into liquidation in May 2019, according to the document. ‘Black Swan Spalding2’ is now registered at the pub’s address, with Sean Moyses listed as sole director.

The police licence review application states: “The Black Swan has had ample time and opportunity to resolve the drug issues at the pub and to become compliant with the conditions on the premises licence.

It goes on to state that the license holder and designated premises supervisor “have failed to ensure licensing objectives are promoted.”

The application concludes: “Lincolnshire Police believe that serious consideration should be given to revocation of the premises licence.”