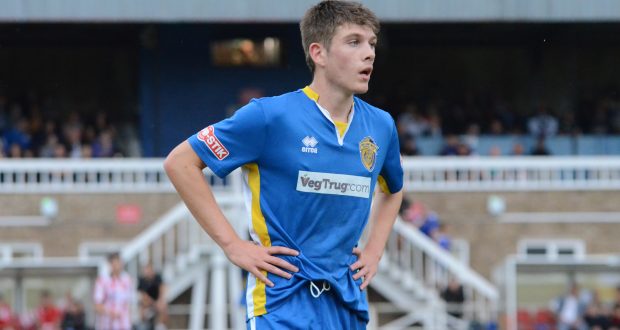 TOP STRIKE: But Luke White's opener was in vain for Spalding. Photo by JAKE WHITELEY

After dominating the first half, the Tulips looked set to end their ten-game wait for an Evo-Stik League Divsion One East victory when Luke White fired them ahead on 61 minutes.

But two late strikes from sub Lewis Szanto (82 and 89) gave Frickley all three points and leave Matt Easton’s side 19th in the table and winless after 11 games.

Easton thought that his side should have been out of sight by half-time, but admitted that they weren’t good enough in front of goal.

“I never really felt confident that we’d hold on,” admitted Easton. “We should have been very comfortable, in all honesty.

“We had so many chances, but just couldn’t seem to put the ball in the net. It’s been a bit of common theme this season, sadly.

“In truth, the game was both encouraging and frustrating at the same time.

“I thought we played some good stuff and put them under pressure, especially in the first half. We walked in at half time and couldn’t believe the game wasn’t done and dusted.

“Sadly, we started to panic with about 15 minutes to go and we paid the price. It was tough for us all to take.”

The Tulips dominated the majority of the first half, having five good chances to score. Both White and Leon Mettam missed one-on-one opportunities against keeper

Hugo Warhurst, while Gary King’s effort was cleared off the line by Ben Algar.

Frickley did create opportunities in a very open first half, with Jacob Hazel having the best chance with his effort just outside the box curling inches over the bar.

The second half continued a very open affair, with Spalding still pushing to create chances and openings.

The breakthrough finally came on 61 minutes when White hit a clearance from the Frickley defence on the volley from the edge of the box for the opening goal to nestle into the bottom corner.

Both sides continued to play, with Frickley using the downhill advantage and putting some dangerous balls into the box – especially down the left hand side.

With 20 minutes to go both sides made a host of changes, with Alfa Jalo coming on and missing a golden chance before later setting up Mettam, whose effort just went wide.

White then curled a great cross into the box for King – but he could not connect with the ball for a possible two goal lead.

Spalding paid for their profligacy when Frickley equalised eight minutes from time when a corner from the right was headed in by an unmarked Szanto in the box.

Frickley kept pushing for a late winner – and in the 89th minute a succession of throw-ins on the left hand side led to a low driven cross into the box for Szanto to connect. The effort took a deflection and crept past Michael Duggan for the victory.