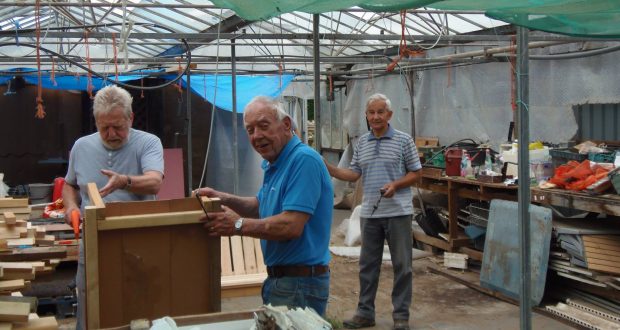 Woodworkers hard at work at the Men’s Shed.

The benefits of joining the Men’s Shed organisation has been highlighted by a South Holland man who was supported by members during cancer treatment.

His wife died two years ago and the man, who wishes to remain anonymous, joined the Long Sutton branch of the charity which was established in 2017 and meets three times a week.

During last year he was diagnosed with an aggressive form of prostate cancer and had to attend the Norfolk and Norwich Hospital every day for eight weeks.

“He faced the very daunting prospect of requiring considerable levels of radiotherapy treatment. This required him to make a journey every day of the week of over 100 miles round trip from the Long Sutton area to Norwich and back,” said Frank Heinrich-Tiller, group spokesman.

“He wishes to thanks his fellow members for their support, accompanying him on some of his trips to Norwich. His extensive radiotherapy treatment has now been completed and he was pleased to ring the bell at the clinic to signify the end of his 37 trips,” he added.

Although the man was not skilled in anything practical he joined the Shed to share coffee, have a chat and make some new friends.

The Long Sutton branch of the Men’s Shed is based at the Silverwood Nursery Centre, Browngate and covers the area from Sutton Bridge to Spalding and Holbeach. It is open every Tuesday, Thursday and Sunday mornings.

The concept a Men’s Shed originated in Australia with Government support more than 40 years ago and there are more than 450 in the UK. It is aimed at older, retired, bereaved, redundant and those with physical or mental health problems or just lonely.