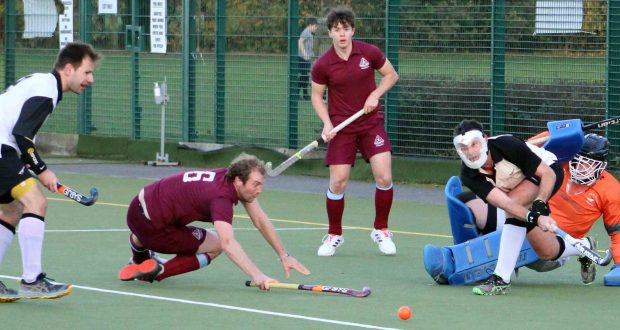 Spalding 1st are back on top of East Men’s Hockey League Division One North after defeating one of their chief title rivals Harleston Magpies 2nd 3-2 at Glen Park on Saturday.

With Harleston top and Spalding 2nd at the start of play, the sides knew that whoever won would be sitting pretty for at least the next week.

Spalding started off strongly with a flurry of quick decisive passes, leading to a goal from Jacob Baker which was slotted home after dribbling dangerously past two players.

The hosts continued to pile on the pressure after going ahead and bagged when Sam Sly played a smooth aerial down the right-hand side of the pitch to find Joe Rogers, who turned and slotted the ball away neatly.

Not done there, Spalding won a penalty stroke and James Mayhew stepped up to fire the ball into the top corner to make it 3-0 at the half-time break.

Spalding took their foot off the gas in the second off and Harleston’s quick passing and speed saw them grab two goals in quick succession.

However, some stunning saves from Nathan Davey and a great last-gasp block from Will Baker stopped the Magpies pinching a point and sent Spalding to the top.

In Division Two North West, Long Sutton 1st were edged out by hosts Cambridge University in a ten-goal thriller.

Dan Oldfield, Brad Sargeant, Josh Baker and Josh Fyson all netted for Sutton, but they suffered a 6-4 defeat.

The loss leaves them in the bottom five.

Down in Division Four North West, Long Sutton 2nd remain top of the table after a 4-1 success at Ely City 2nd.

Sutton dominated the first half and made the breakthrough after 15 minutes when Ed White fed in a short corner to Stefan Fox, who finished clinically.

The lead was doubled when Will White scored following good work from player-of-the-match Tyler Hagan.

A well-worked team goal which started with Tom Baguley and ended with Alex Canham playing in Frazer Watt to finish made it 3-0 to Sutton at the break.

Nothing changed in the second half as Hagan assisted for White to make it 4-0 with his second of the day.

Ely kept on going and did pull one goal back, but Sutton were comfortable winners and now sit five points clear at the summit.

Also winning 4-1 were Spalding 4th, who had too much for visitors Kettering 3rd at Glen Park in the same division.
After 25 minutes of pressure, Spalding went ahead when Tiago Read netted from a short corner.

Ben Scholes then expertly dispatched a one-touch finish into the bottom corner for 2-0, before where Jack Martin was on hand to slip a clever finish into the gap between keeper and post for 3-0 at half time.

Kettering pulled one back from a short corner in the second half, but Matthew McManamon-Cookson slotted home a fourth goal to seal the win for Spalding, who climb up to fourth in the table as a result.

A solitary strike from Jack Smith in a game where Troy Croxford picked up player-of-the-match settled the Peele Leisure Centre clash in Sutton’s favour.

Down in Division Six North West, leaders Spalding 5th collected a point after drawing 1-1 at City of Peterborough 8th. A deflected finish from Liam Fravigar did put Spalding 1-0 up, but they were pegged back.