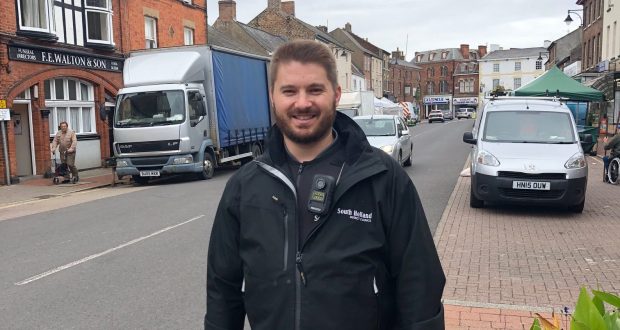 Meet one of the men making a difference in the district

He’s the father of one, a former national kick-boxing champion and his team are looking to make a difference in South Holland.

Rob Duckett is one of South Holland District Council’s Community Wardens and they’ve been traipsing all around the district for around 18 months.

But to get a better idea of what they do, we joined Rob on one of his rounds.

He and Jason Farmer work in shifts to patrol the area.

They can issue on-the-spot fines for certain things (more on that later), but it’s also about helping people feel safe in their South Holland homes.

“I love it,” Rob says as we march around Long Sutton on a market day. “It’s a really good job, that’s good fun while helping others.

“Also, no two days are the same.

“It’s nice that you’re making a difference to the community for a good reason.

The 32-year-old previously worked in the fitness industry before taking an enforcement officer role with Peterborough City Council.

The father of a nine-month-old, he’s still keen on fitness, though not at the level that saw him win kickboxing championships, but does walk around ten miles a day with his job.

With his SHDC provided uniform, body camera and (thankfully never used) stab vests, the wardens are free to go where they want, but do regularly check “hot spots” where a number of complaints may have been made about anti-social incidents.

One such hot spot on our visit to Long Sutton was around the park which was its usual tranquil area of town.

“You never know when it’s going to be busy,” Rob said when asked if there’s more of a problem when the schools are off.

“Often it’s most busy on the days you expect it to be least busy.

“The more reports of anti-social behaviour we get the better so we can visit those areas more.”

The Public Protection Order in Spalding allows the wardens to fine for littering, spitting, indecent behaviour and drinking in the streets.

“With street drinkers we ask them to pour it away, which they do, nine time out of ten,” Rob continues. “If they don’t we hand them a fixed penalty notice there and then.”

They currently can’t do anything about bikes on pavements or in Spalding town centre, something that’s been raised on numerous occasions to them.

“At the moment we’re trying to work with the police so we do something about bikes,” Rob says. “It’s not in our powers currently but it’s something we’d like to be able to deal with.”

Out on a showery autumnal day where we walked nearly four miles around Long Sutton, Rob doesn’t see anyone deserving of a ticket or talking to.

“You can go days and weeks without issuing tickets, but that’s great because we don’t want to give out tickets.

“What we want to get across is to stop people from doing things like littering before they do it.”

Rob has had a little grief from the public, and there’s a related upcoming court case he’s not allowed to talk about, but he stresses that 99 per cent of the people are fine, even if they get fined themselves.

“The only time there’s an issue is if you’re issuing a ticket to them”, he adds. “But even then, most of the time people accept what they’ve done and get on with it.

“Yesterday I gave a ticket for littering to someone who dropped a cigarette butt on the floor. He was annoyed at first but it ended with him shaking my hand.

“It’s a mistake but people make mistakes and hopefully they’re learning from it and that’s the ultimate goal for us.

“Word is getting around about us. We’ve done a lot of social media.

“A lot of people see us out and about and there’s the calling cards we put through doors so people can see we’ve been down their streets.”

The cards were Rob’s idea. They have his name and contact details on, along with information on how to report incidents.

It also lets people know the wardens have been around the area, especially those that might not be on social media.

“I’ve had great feedback from pushing the cards through the door that people knowing there’s just someone in their area makes them feel more safe in their own home, and that’s always a nice feeling.”