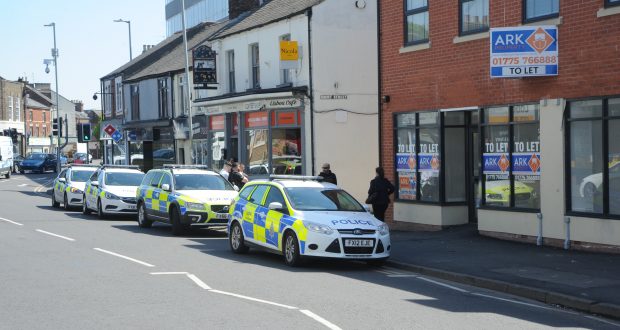 A man has been charged with two counts of possessing an imitation firearm after someone was reported as having what looked like a gun in their back pocket in Spalding town centre yesterday (Monday) morning.

Kacper Malkiewicz, 21, of Cross Street, Spalding, has been bailed to appear at Boston Magistrates Court on June 19.

It follows police raiding a property on Winsover Road, closing that road, St Thomas’s Road and Swan Street at around 11am yesterday.

Three other men aged 24, 28 and 31, who were arrested in connection with the incident, have been released without charge.

Spalding Inspector Gareth Boxall said: “We received a report of a man who had what looked like a gun in his back pocket, in Spalding town centre.

“As a result of this report, Lincolnshire Police firearms officers contained and searched a premises on Winsover Road. In order to ensure that we could carry this out safely, we closed that part of Winsover Road to vehicles and pedestrians.

“We arrested four men from the location and recovered an imitation firearm. As a result, we charged a 21-year-old man with two counts of Possessing an Imitation Firearm in a public place. The three men arrested have been released without charge.

“Whilst I appreciate that this must have been worrying for residents of Spalding, I ask that people keep in mind that the weapon located was an imitation firearm. We had no way of knowing at the time of the report whether this a real firearm which is why we took the matter so seriously, deployed specialist officers to the scene and closed the area.

“I am sorry for the inconvenience that this may have caused, but when we deal with these types of incident, our number one priority is keeping everyone safe.

“I hope that residents are reassured that we take these matters so seriously and the good news is that we have taken another weapon off the streets which looked like a viable firearm and have charged a man for its possession.”