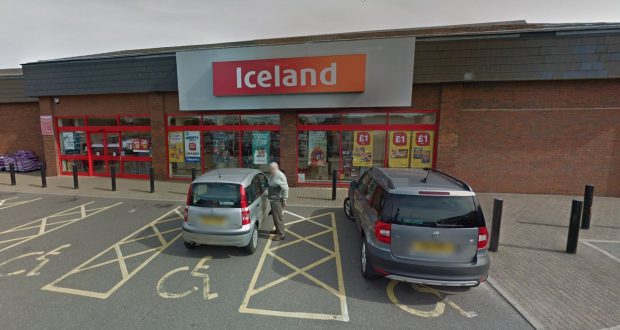 Iceland in Spalding as seen on Google Street View.

A disabled man currently banned from Spalding town centre for a string of incidents has been found guilty in absence of abusing a supermarket employee by Boston magistrates.

Matthew Peter Bellerson, 45, of The Chase, Pinchbeck, failed to appear before at the hearing but was tried and found guilty in his absence.

The court was told that at 11am on May 29, Bellerson, who was on a mobility scooter, went to the Iceland store in Spalding where a female employee was managing a queue of 20 to 30 people, because of social distancing inside the store.

Prosecutor Sukhi Singh said Bellerson was ‘well in drink’ and he started shouting and swearing at the employee, saying: “You’re lucky you’re not a bloke or you’d be on the floor by now,”

He said Bellerson continued to shout and swear despite being asked to be quiet until a member of the public intervened and Bellerson started swearing at him before again returning to swearing at the employee, who sounded the store’s panic alarm and he left.

Bellerson was later seen by the police and told them he couldn’t remember the incident but said he ‘must have been drunk and drugged up’.

Mr Singh said Bellerson had 83 previous convictions and was currently on a community order.

In September Bellerson was banned from the town centre.