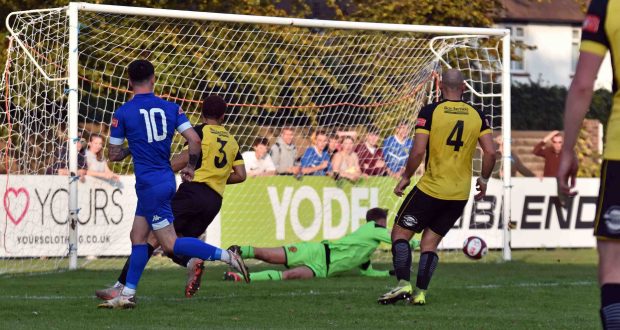 The talented forward settled the Second Qualifying Round contest with his third goal just four minutes from time at the Sir Halley Stewart Playing Field – setting up a showdown with higher-graded Tamworth in the next round on October 30.

Macleod had earlier given Gaby Zakuani’s side the lead on five minutes, only for Danny South to make it 1-1 on the hour.

The ever-impressive Macleod was at it again on 59 minutes for 2-1, but that man South levelled the contest again 15 minutes from time.

However, Macleod’s late winner saw Spalding into the next round and earned the club a healthy £2,250 in FA prize money.

Boss Zakuani was delighted with the victory and admitted that he’s currently enjoying a “feel good factor” in his first full season as Spalding supremo.

“Another impressive performance from my lads in the FA Trophy at the weekend, against a strong, physical Belper side,” said the former Peterborough United defender. “A huge test against Tamworth in the next round.

Spalding named new signings Harry Olivant and Liam Adams on the bench, with both making their debuts as second-half substitues.

Macleod’s treble was impressive, with the first seeing him race onto a Gregg Smith flick on and slot home.

His second saw him charge down a clearance before racing down the right, cutting inside and firing past Ollie Battersby.

The clincher was clincal, with Macleod keeping his cool to slot into the far corner with aplomb.