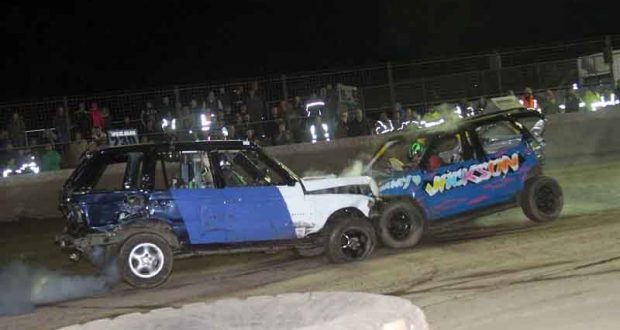 READY TO ROLL: Dean Mouljord will be in the thick of the action in the 4x4 Bangers. Photo by Damien Widdows

Saturday night sees the biggest and best Unlimited Banger drivers from all over the country take on the East Anglian Championship – one of the oldest and most coveted titles on the line.

All-action, heavy hitting 2-litre Saloon Stock Cars and 1300cc Stock Cars join them in a night of where pile-ups, crashes and roll overs are all part of the race spectacle.

In the Unlimited Bangers, Spalding’s Ryan Leeks and Dean Mouljord will lead the charge, while in the 1300 Stock Cars Holbeach’s Stephen Murphy will be looking to carry on his great form.

Points champion, Pinchbeck’s Dan Booth, will be looking to turn his season around and finally pick up the chequered flag.

On Monday, the Wacky Races are centre stage where the destruction continues, but in some different vehicles to the norm.

Taking to the track will be the 4×4 Bangers, Siamese Bangers and Reliant Robins, with the ever-entertaining Micro Bangers added for good measure.

The South Holland drivers will be represented well on the day once more.

Mouljord will have a busy weekend as he will be back out in the 4×4 Bangers and will be joined by fellow Spalding racer Sonny Parsons, who will be looking to be on good form in his 4×4.

In the Micro Bangers, Crowland’s Harry Cole will be looking to keep on his good form from the previous meeting and will be eager to pick up a win again.

The will be joined by Reece Crane who is always up for a crash, as is Spalding’s Liam Neve. The Micro Bangers will be racing in the crazy races, where races will be themed – including Le Mans Start, Spin to Win and many more.