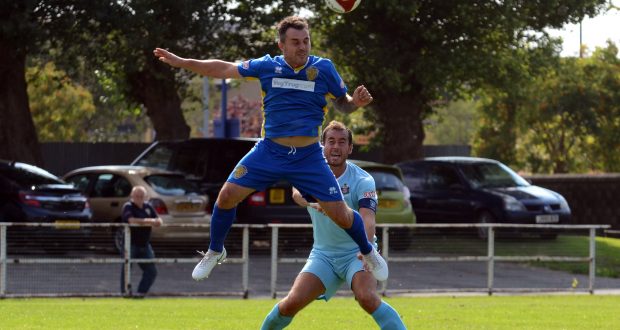 A well-taken goal ten minutes from time by Leon Mettam brought Spalding United their first NPL Evo-Stik East Division win on the road this season at the expense of higher placed Gresley at The Moat Ground on Saturday.

This 1-0 success followed a 2-2 draw between the two teams at the Sir Halley Stewart Playing Field just seven days earlier and was achieved with a highly competent display by Matt Easton’s men – who have now won seven points from a possible nine in their last three games and have climbed another two places to 16th in the table.

Gresley were a player down after 16 minutes when Dexter Morris-Clarke was sent off for serious foul play on Mettam. And, at the end of the game, substitute Dominic Allen received a red card for a second bookable offence after the final whistle.

However, contrary to some comments seen on social media post-match, this was never as ugly a game as the number of cautions handed out by referee Duncan Hunt would suggest, just one of full commitment by both sides.

The Tulips fully-deserved their victory, which could have been achieved by a more comfortable margin.

Mettam could, and perhaps should, have had a hat-trick, even having one shot rebound from a post with goalkeeper Oliver Fairbrother nowhere to be seen after mis-kicking an attempted clearance in first-half added time.

Playing down the notorious Moat Ground slope for the first-half, Spalding dominated much of the play.

After just two minutes full-back Conor Marshall, – who went on to have a good game – fully tested Fairbrother, but was caught just offside. Then a header by Mettam following a corner was just wide of the woodwork.

When the home side ventured into Tulips’ territory, they were held in check by a steadfast back line.

Their first and most threatening attempt on goal ended with a lame shot which Michael Duggan (returning after a two-game absence through injury) comfortably dealt with.

As the game edged into added time, home keeper Fairbrother handed Mettam an open goal situation but he missed out, firing against the far post.

Moments later the keeper was at full stretch to keep his side in the game.

Despite battling with only ten players on the pitch, Gresley featured more in open play but were still being denied by a solid visiting defence.

However, the deadlock was finally broken in the 80th minute. A beautifully executed lofted pass over the home rearguard by Jack Brownell saw Mettam burst through into space, bring the ball under control and guide a fine finish past Fairbrother.

There was almost a sting on the tail as only a brave save at the feet of Kane Lee by Duggan on the edge of the 18-yard area denied Gresley the chance to level the scores in the dying embers of the match.