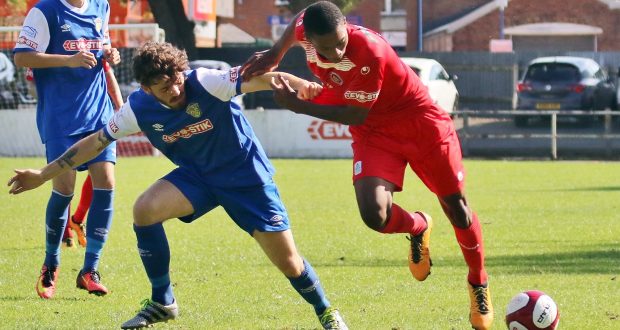 Acar struck 18 minutes from time to give the Tulips a key 1-0 victory at Kidsgrove Athletic, making it seven points from four tricky away games on the spin and ensuring they remain in the box seat to clinch a home draw in the play-offs.

With just one days’ rest from their battling performance and very late drive home from second placed Witton Albion on Thursday, it was a very tired set of Spalding players who did battle on a scorching hot afternoon – and hosts Kidsgrove did their utmost to exploit the situation.

Chris Rawlinson’s Tulips were subjected to considerable pressure from the start, but managed to restrict the home team to few scoring opportunities.

However, only a super save by goalkeeper Michael Duggan from an excellent strike by Anthony Malbon saved them from going behind after just four minutes.

The Tulips’ one worthwhile shot came just before the interval when a sizzler by Lee Beeson soared over the home crossbar.

Fatigue was certainly showing, but somehow Spalding found new reserves of energy and ran themselves into the ground in search of valuable points.

Roles were reversed as Kidsgrove experienced pressure after the break, with some quality play by the Tulips almost bringing reward on 64 minutes when Jordan Lemon’s well struck shot from the edge of the area was deflected for a corner.

The all-important goal arrived on 72 minutes following another good sequence of play. Again Lemon was involved and his low cross into a crowded goal area found Cenk Acar beside the far post to turn the ball over the line.

Sam Downey, Connor Higginson and Jonny Lockie all came off the bench to replace tiring colleagues in the final quarter of the game and to ensure pressure was maintained on the home team.

There were outstanding performances from each member of the team, many of who had battled through the pain barrier to secure the victory which in the end was fully deserved.