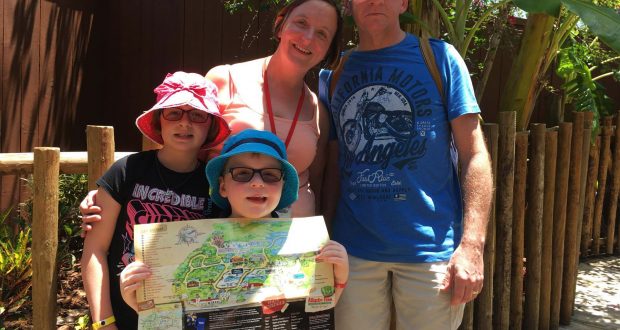 Seven-year-old Kieran Taylor (7) enjoying some leisure time in America with parents Steve and Karen and sister Caitlin (9) before his cancer treatment began.

Kieran’s specialist cancer treatment in USA gets under way

Specialist cancer treatment in America for Deeping St Nicholas lad Kieran Taylor got under way on Tuesday (June 20).
The seven-year-old, who had a brain tumour removed last year, will have daily proton beam therapy for six weeks in Florida. The NHS-sponsored therapy, currently not available in the UK, deals with types of cancer in critical areas when it is important to reduce damage to surrounding tissue as much as possible.

Mum Karen said Kieran had been having lots of appointments in America to make sure everything is in order and described the therapy process.

“Kieran has to lay still on a table and go into a machine that looks like an MRI scanner,” she said. “He has to wear a mask that has been moulded to the shape of his face. This will make sure that the proton beam hits the exact spot that needs treating. His treatment will be about half an hour each day for the next six weeks with a rest at the weekends.”

She added: “Kieran seems to be taking everything in his stride and doesn’t seem at all bothered about the machines.”

The family started a community fundraising appeal for financial support before they left Britain, which raised more than £10,000.

Through a wish charity, The University of Florida Health Proton Therapy Institute has arranged tickets for some of the top theme parks.
Karen said: “We have been absolutely overwhelmed by the generosity of the people here, they can’t do enough for us.”