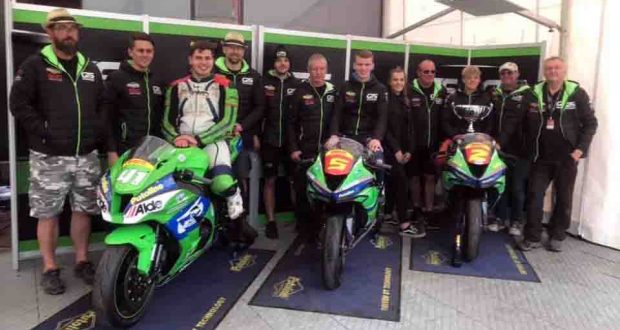 WE GO AGAIN! G&S Racing Kawasaki have retained their three riders for 2020.

Keyes, Toms and Ward all agree to stay with G&S Racing Kawasaki in 2020

G&S Racing Kawasaki have announced that all three of their riders – Kevin Keyes, TJ Toms and Milo Ward – will remain with the team for the 2020 season.

Keyes and Toms will be contesting the Pirelli National Superstock 600 Championship for the Wyberton team, with Ward in the Stock 1000 series.

Ward impressed in his first season in the Stock 1000 class and improved with each race. He ended the season at Brands Hatch with a sterling performance and is looking forward to carrying on where he left off.

Keyes gave the team their first win in the Stock 600 series back in April at Silverstone and completed the season in a strong eighth place.

Toms, meanwhile, has shown massive promise with the team this year and was one of only two riders to complete every round in the points – including a couple of second places at Thruxton and Brands Hatch.

He ended the season in sixth place.

Team manager Tom Fisher said: “We had a difficult start to the season with the new bikes, but we developed them through the year and now have a good base setting on all three machines and can start testing with confidence in early February.

“All three riders are happy and settled and we can hit the ground running in 2020.

“We will be welcoming our support team back for another year plus a few new faces and we look forward to working with them and of course give a massive thanks to Kawasaki and our loyal sponsors who continue to support us.”

The opening round of both championships will take place at Silverstone over the Easter weekend of April 10-12.