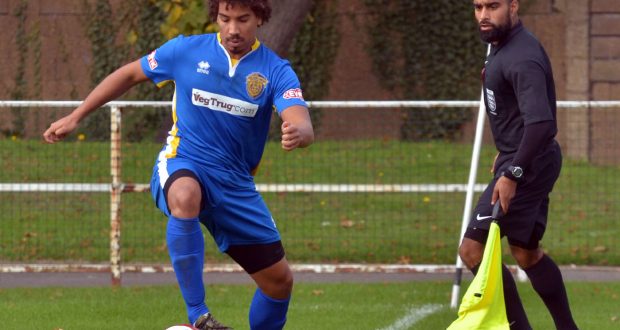 Spalding United got back on the winning trail in the BetVictor NPL South East Division on Saturday with a 2-1 triumph at Newcastle Town on Saturday.

The Tulips last tasted a league victory back in early September at home to Cleethorpes Town – and they were made to work hard for maximum points in the heart of The Potteries by a Newcastle side that had not won a home game all season.

Both teams showed their nervous sides in a largely uneventful first half with so much at stake, but the Tulips stepped up the tempo after the break and were ultimately well worth their victory.

As they had in the drawn encounter with local rivals Stamford a week earlier, both Lewis Brownhill and Jamie Jackson scored the Spalding goals.

Skipper Brownhill broke the deadlock with a superbly taken goal in the 56th minute only for Newcastle to level the scores just three minutes later.

But Jackson secured the win with a 72nd minute penalty – his second in a week – stepping up to the spot after being upended in the area.

Jackson just missed out on breaking the first half deadlock two minutes before the break.

Put on a run down the right side by Tulips’ man-of-the-match Taron Hare, the striker weaved a way past defenders to get within sight of goal but shot inches wide of the target from close in.

Earlier, Jenk Acar was inches away from connecting with a superbly threaded pass into the home area and another effort was hooked over the home bar with keeper Raajan Gill rooted to the spot.

The home team battled strongly with their best efforts stemming from left winger Charlie Scott, who was watched closely throughout by the influential Hare.

The tricky and speedy winger broke free in the 16th minute to set up Harvey Howell, but Alex Smith, deputising again for the injured Michael Duggan in the Tulips’ goal, reacted smartly to race from his line to kick clear.

Smith was then at full stretch to keep out a well delivered free kick ten minutes into the second period.

From his clearance a break down the right side led to the Tulips’ opening goal with Joel Brownhill providing the perfect cross for bother Lewis to smash the ball into the net.

Celebrations though, were short lived. The Tulips failed to deal with a Scott initiated left-side attack and when the ball finally arrived in the area Jack van der Laan made contact and equalised with a sliced shot, the ball squeezing past Smith to go in via a post.

At the other end, with the game reaching its final quarter, the home goal led a charmed life with three consecutive shots cleared from the line.

But the destiny of all three points was confirmed in the 72nd minute with Jackson’s successful kick from the penalty spot flashing past the diving Gill and ending an eight-game winless run.