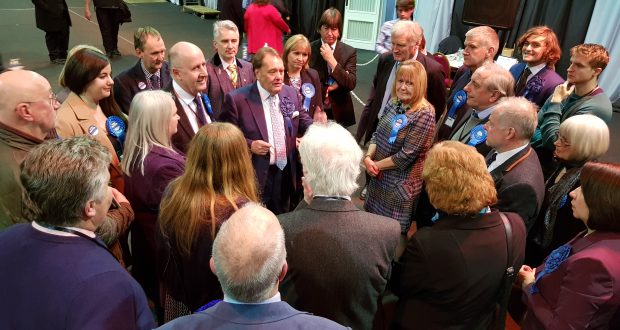 Returning South Holland and the Deepings constituency MP Sir John Hayes has thanked voters after electing him to the position for the seventh time.

Sir John picked up over 75 per cent of the vote in the constituency, polling his highest ever total of 37,228 and extending his majority to 30,728.

Since being elected for the first time in 1997, he continued his trend of increasing his vote share every time.

When asked if the result was better than even he could ever have envisaged, he told The Voice: “I’ve never had a sense of entitlement so I never expect it. I didn’t start with a thought about what might occur.

“I felt I had a very good chance and I know the constituency well and I know it’s a very Conservative area but you can’t be presumptuous and you can’t take anything for granted, so I worked really hard.

“I campaigned hard, distributed a lot of leaflets and I really tried to engage with as many voters as I could. I don’t want to take those people for granted.

“To the voters, thank you for placing your faith in me. All those that voted for me particularly, but for those who didn’t, my job now is to represent the whole of the constituency and when someone comes to you with a problem concerning benefits, housing or health, or any number of other things you don’t ask them how they voted.

“I will represent the whole of my constituency.

“It is a remarkable result for me. That’s due to the team that worked for me and gave their time and their skills to my campaign and in my interests, but it’s actually mostly about the people that put me in power again, and I thank them.”

Given the huge 75 per cent voter share, The Voice asked Sir John if he’d be after another job on the Prime Minister’s cabinet.

He laughed before saying: “That’s a matter for the Prime Minister and not for me.

“I’ve a long experience in government as you know, but actually I just always ever wanted to be an MP.

“The business of being an MP is what’s always excited me.

“Taking up local campaigns and causes and speaking out on any number of subjects in the house as I have done, that’s what is so exciting about this job – you can make a difference with people.

“People go into politics to make a difference, at least that’s why I got into it, I want to end my life in many years to come by looking back and saying I gave it a best shot.

“I want to say that I left the area where I lived the country that I love better than it would’ve been had I not been there.”

In second place was Labour’s Mark Popple. On what was a bad night for his party all round, his share of the vote fell by 3,782 votes to 6,500.

“I’m really pleased with the campaign we’ve run,” he said. “It was a really positive campaign fighting on the burning issues of this constituency, rising foodbank usage, the lack of transport infrastructure in our area which needs vast improvement, tackling the climate crisis and the fact that childhood homelessness is going to be double this Christmas what it was last Christmas and fighting for economic policies to ensure those issues are tackled.

“Obviously the vote is unfortunately down compared to last time. With the national picture that’s not necessarily too surprising but I don’t think I can fault the campaign we’ve run.

“We’ll be back stronger and fighting fit for the council elections in about a year and half time.”

All three of the other candidates also gained more votes than their respected parties did in 2017.

In third place was the Liberal Democrat candidate Davina Kirby who more than doubled her party’s vote from 1,433 to 3,225.

She said her party had exceeded expectations in South Holland.

Davina Kirby: “I’m delighted we got the vote share up significantly. We’ve done a great campaign and the country knows we watned to remain and so does South Holland and the Deepings.

“They supported us and I believe that we’ve doubled our vote share.”

Martin Blake also increased the Green Party’s share from 894 to 503.

“It’s a not unexpected vote overall,” he said. “The candidates came in the order you might have expected given the relative degree of media exposure of the parties concerned.

“The Green Party always struggles to get the coverage the Conservative, Labour and Lid Dems get but I’m happy we’ve significantly increased out vote since 2017 and we’ve made the case for the urgent need for action on the climate emergency which is the central point of our campaign.

“We’re proud. We’re always having to work smarter given the very limited voices we have available compared to other parties and I think, under the circumstances it’s been a very creditable performance.”

Rick Stringer, who was standing in his second succesive General Election as an independent, increased his votes from 342 to 502.

He was unable to attend on the night.