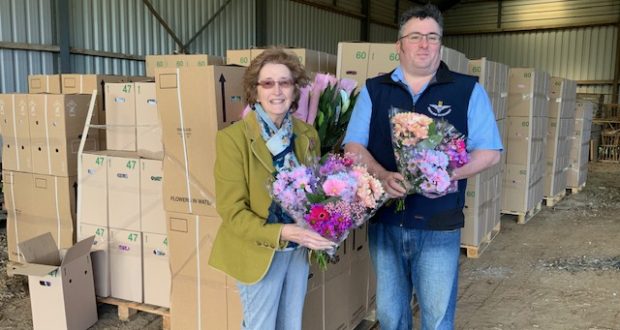 ‘It was the nicest knock and run you’ve ever seen’

As South Holland got used to self-isolation following the Covid-19 outbreak, a councillor helped organise 50 volunteers to keep spirits up on Mother’s Day by delivering around 3,500 flowers.

District councillor Rob Gibson was offered the flowers by Green Partners of Moulton.

He asked on social media if people would come forward to help him distribute them and a whole army did so.

And Coun Gibson said the acts left some in tears of joy.

Coun Gibson, who works with the charity Framework that helps the homeless, said: “I get regular emails from companies asking if we can do something with stock and accepted Green Partners donation of flowers thinking I could do something to raise some smiles.

“Then on Saturday they delivered 20 palettes of them.

“I put a post out on social media asking for volunteers to help distribute them on Sunday and the response was excellent.

“Via a friend we were able to get many to NHS workers and we were also able to get them to care homes and through some churches. We had a number of volunteers helping including from the Spalding Kindness Team (see page six).

“The response we had was just amazing. There was one person who after we’d dropped the flowers on our doorstep and knocked on the door, then chased us to say thank you. She said, she’d give it to her a mum, so we offered her another one and was so over-whelmed she burst into tears.

“We heard from a few volunteers who had a similar reaction from people who have been self-isolating.

“A few children joined in and enjoyed knocking on a door and running away.

“It was the nicest knock and run you’ve ever seen.”

Coun Gibson’s 73-year-old dad John drove the pair around his Spalding St Paul’s ward handing out the flowers but stayed in the car for the journey.

“We did our best to keep a safe distance and though we had a lot of people helping, they distributed the flowers in different places at different times of the day throughout Sunday,” Coun Gibson continued.

“I would like to thank everyone who helped out in any way, especially the volunteers and Green Partners for donating these flowers.

“It was amazing to see so many people come together to do something like this at a difficult time.”

Coun Angela Newton was another to help distribute flowers in her Spalding Monks Spalding West ward.

Alongside Coun Anthony Cronin she and Coun Gibson have posted information self-isolation leaflets through doors in their wards.

Coun Newton said: “It’s to give residents details of shops which will deliver some essentials and meals on wheels. It also included our offer to pick up essentials if residents did not have any other help.”