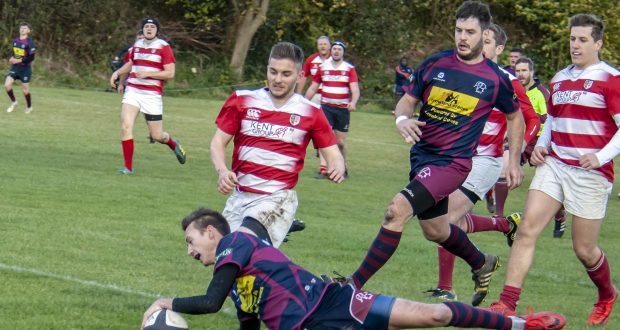 OUT: Gav Sharman was one of the many players Spalding RFC were without. Photo by ADRIAN SMITH

Depleted Spalding RFC were handed their first home defeat of the Midlands Three East (South) season as ever-improving Oakham won 34-24 at the Memorial Field on Saturday.

Town did manage to secure a losing bonus point having scored four tries, but a home loss leaves them needing elusive away victories to get their season back on track.

With Will Shields likely to be out for the rest of the season, Willis Ingleby affected by a severe cold, Taylor Crowson having pulled a calf muscle in training, Gav Sharman unavailable for the weekend, Harry Sharman out with a rib injury and forwards Ash Anker and Ash Piccaver still not fit, the Elephants were always up against it.

However, this did give Colts’ talent Jack Patrick the chance to make his first start at centre.

Oakham started the brighter, testing Spalding’s defence. But Town’s back row forwards of Jason Steels, Conor Lilburn and Harry Brown have the pace to worry any team and it was Steels who burst through the middle to score under the posts.

And, with a simple conversion for fly-half Conall Mason, an early lead was on the score board.

After 20 minutes of play Oakham started their scoring with a penalty kick and shortly afterwards spread the ball out wide to their right winger to score a converted try.

More injuries followed for Spalding as John Barrett hobbled off to be replaced by Aaron Coupe and Liam Adams was also on for Jordan Templer.

Oakham were getting stronger as the match evolved, being prepared to spread the ball out wide to stretch the home defence but it was their forwards who set up a driving maul for their next converted try and a ten-point lead at half-time.

The visitors continued to build after the break, having the confidence to pass the ball along their back line as Spalding struggled to make any inroads.

It was no surprise, therefore, when Oakham increased their lead with the back row combining to break through a couple of tackles.

Within five minutes the visitors sealed their away win with their outside centre finding space to run in out wide. And, with another successful conversion from their scrum-half, a 24-point lead had been established.

Spalding then started to click, as their play became far more cohesive. Captain Dan Adams made inroads into Oakham’s defensive lines and number eight Brown, who had made many effective carries during the game, was even more prominent.

Harry Cole then started the second half scoring for Town with a typical forceful run. Encouraged, Spalding continued to pin Oakham back deep in their half from a ruck ball on Oakham’s five metre line and the ball was moved out for Coupe to sell a lovely dummy pass for a converted try.

With time nearly up, Town created some space out wide for left winger Callum Lewis, to score in the corner.

The defeat leaves them down in ninth place, some 13 points behind early pace-setters Stamford.

This Saturday sees Spalding make the trip to Queens, who are one of only three teams below them in the table.