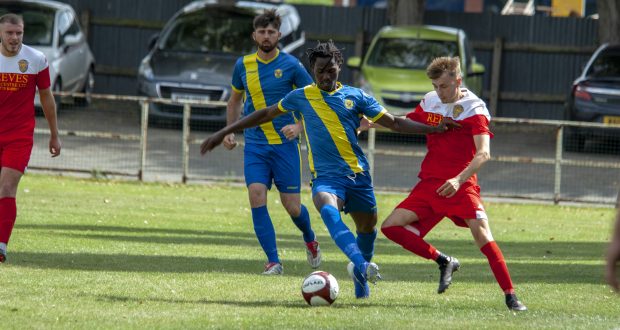 Spalding United’s return to action for the first time since March proved a tough one against a strong Peterborough Sports side.

The result of the first pre-season friendly was never particularly important for Tulips manager Lewis Thorogood whose side have been in training for several weeks.

But he’ll be particularly disappointed with injuries including the loss of Jack Smith to an injury that may already have left him out for the season.
Smith went down just before half time after falling awkwardly.

And the Tulips picked up a few knocks with Jacob Fenton too being withdrawn in that first half after making the move from Bourne Town last week.

Thorogood said Smith was in hospital on Tuesday undergoing scans.

“He’s in the fractures unit, but we don’t know yet whether it’s a fracture, an ACL or anything.

“It’s just one of those things that happens.

“He landed awkwardly and it’s something in his knee.”

By the time Smith went off the Tulips were already 2-0 down.

The Southern League Premier Central side are hotly tipped to do well this season and they made a swift start.

They had the better of the opening exchanges and created a couple of half chances.

Spalding improved before the first drinks break with Jacob Fenton, a recent acquisition from Bourne Town going closest to opening the scoring for the home side with a free kick.

Two goals in four minutes, the first in the 29th minute, gave Sports the advantage.

Mark Jones gave the visitors to the Sir Halley Stewart the lead.

A rare error by veteran keeper Michael Duggan who misjudged the bounce of the ball led to the second as Dion Sembe-Ferris took advantage.

The highlight of the half for Spalding was former Lincoln City man Jamie Goddard going close with a cross-come-shot before easily the lowlight being Smith’s injury on the stroke of half time.

Spalding struggled to create too much into the second period with Paul Malone going closest for the visitors putting a header wide.

Matt Sparrow had been denied on a couple of occasions, but he ensured the game ended 3-0 with a nice finish in the 82nd minute.

Thorogood said: “Peterborough Sports are a very good side who are very well drilled having played together for two or three season and I think that showed.

“They were near the top of step three for a reason so we always knew it was going to be a tough.

“In the first half I thought we started really well.

“We went 1-0 down to a very well worked goal and the second was just an unfortunate misjudgement.

“Michael just misjudged the bounce of the ball on the hard ground, and as he said himself, that’s what happens when you haven’t played for five months.

“We had a great opportunity to score and then in the second half we had a lot of younger lads and triallists.

“They changed their whole 11 but to be fair they have 22 very good players and if anything arguably put out a stronger team.

“It was difficult on a hot day and they scored from a late breakaway.

“I was impressed with the lads that they put the effort in and wanted to do better which is a big tick from me.

“The down side was the couple of injuries.”