Increase in charges but dentists are still struggling to recruit locally

Dental charges are increasing but recruiting staff for dentists continues to be a problem in South Holland, according to a local councillor.

Coun Chris Brewis in his report to South Holland District Council’s meeting last night (Wednesday) on health issues in the county states that “recruitment and retention of dentists and dental nurses was putting increased pressure on the services.”

It says that currently there are 44 vacancies out of a total complement of 300 staff in South Holland.

Coun Brewis’s report continues: “There was, it was acknowledged, less than adequate provision in the Boston and Spalding areas.

“New contracts were hoped to be awarded, but probably not until 2020.

“The recruitment of senior clinicians remained a problem, despite a largely unsuccessful recruitment campaign, conducted both nationally and internationally.

“The ‘rurality’ issues of areas like Lincolnshire were not understood by contract writers nationally.

“It was no accident that the worst affected areas for recruitment were Cornwall/Devon, Cumbria and Lincolnshire.

“Targets were also difficult to achieve, in that these were, for example, requiring a minimum number of procedures to be performed in a day, or the trust was penalised.

“Healthwatch Lincolnshire admitted that they received more complaints about dental services, or a lack of them, than about anything else.

“In general, I stressed the need at an earlier age, to point out to students what advantages there might be in pursuing a medical career.” 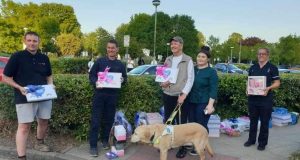 Dennis led the thanks to key workers for final Thursday