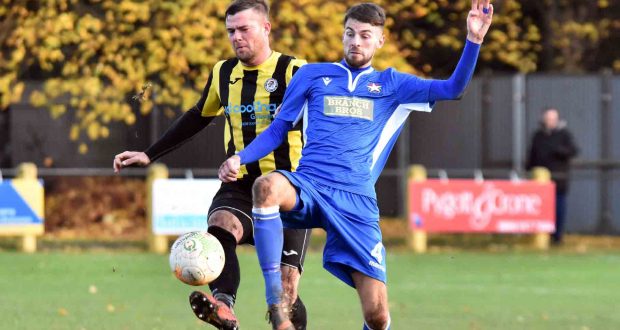 It’s fair to say that Holbeach United have a score to settle this weekend.

The Tigers were on the receiving end of a 5-0 Carter’s Park beating by newboys Loughborough University on the opening day of the Uhlsport UCL Premier Division season back in August.

There was a huge gulf in class between the two teams that day, but fast forward five months and Holbeach are just one point behind Loughborough in the table – and have only lost once more in the league.

Holbeach boss Danny Hussey, who has steered his team to fifth place after a 12-game unbeaten run, wants his side to do all they can to keep it going on Saturday (3pm).

He said: “The facilities will be great and the pitch will be very good – they like to play good football.

“We all know that it’ll be a tough game. I think the opening day score shocked some people, but they should be doing well – all of their players train every day and are ex-scholars/professionals.

“When you look at it like that, they should really be further ahead of us in the table.

“I’m happy with where we find ourselves in the table – we’re still in and around the top teams.

“We’ve had a few poor results against teams that we’d be expected to beat and that has left us a little further away than we should be.

“After drawing 0-0 against Oadby on Saturday, I’d hope to see a reaction this weekend. That’s the mentality I’m looking for.

“Beating the lower teams is the difference between being in the top five or the top three.

“But I can’t complain too much, we’ve had a good run. All I ask of my lads is that they go there and play the right way.

“If we lose our unbeaten run, we need to do it in the right way.”

Hussey is without key striker Josh Ford (away), while fellow frontman Ryan Oliver is also unavailable.

Luke Avis (ankle) remains sidelined, but Danny Setchell and Jonny Lockie are pushing for places in the starting line-up after coming on as substitutes in the Oadby stalemate.