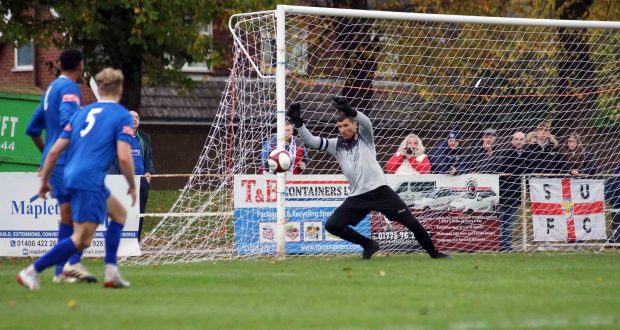 Spalding United slipped to their sixth defeat on the spin as Worksop Town deservedly dealt them a 2-0 beating on Saturday.

Goals in each half from Lewis Gibbens (35) and Gavin Allott (pen 57) sent the Tulips – who were table-toppers after two games – down to 17th place in the Pitching In NPL South East Division table.

Once again under the caretaker charge of Neal Spafford and Gaby Zakuani, there was no disgrace in losing to a side that are clearly among the promotion favourites this season.

Worksop started the better of the two teams and fashioned the first chance after winning a corner early on.

Michael Duggan in the Spalding goal punched the ball clear, but it fell kindly to Connor Smythe on the edge of the area – who saw his volley fly high and over the crossbar.

The first major chance of the game fell to the Tigers, when fine play down the line saw Mikey Dunn cross the ball into Vaughan Redford, who couldn’t get the ball out of his feet and saw his shot go just wide of the post.

The Tulips then threatened at the at the other end when Joel Brownhill found himself through on goal.

However, home keeper Sebastian Malkowski was alert to the danger and saved superbly to keep the scores level.

The deadlock was broken in the 35th minute when home debutant Lewis Gibbens diverted the ball home into the bottom left corner from a well-taken free-kick by Smythe.

Moments later, Worksop threatened to double their lead when Cody Cromack’s shot from the edge of the area flew towards the top corner, but Duggan expertly tipped it over the bar.

The second half of the game burst into life 12 minutes in when keeper Duggan brought down Allott in the area as he was chasing a loose ball.

Allott picked himself up to take the penalty that he won and slotted past Duggan into the bottom right corner.

Worksop nearly went 3-0 up shortly after when a well-worked free-kick found its way to Michael Dunn on the edge of the area.

His looping shot, which was heading for the top right corner, was saved in acrobatic fashion by Duggan.

The Tulips nearly got themselves back into the game in the dying moments when substitute Spencer Weir-Daley’s shot was expertly saved by Malkowski in the Tigers goal, tipping the shot from close range onto the crossbar and out for a corner.

The loss leaves Spalding seven points off the top six.