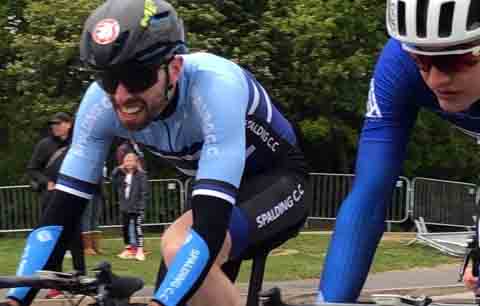 This involves putting the fastest ten-mile riders in one hat and the slower ones in another and – then drawing them out alternately. The strong breeze was from the east making speeds down The Delph above 25mph.

Palmer (22.49mins) was just behind in second, with Andy Bowser (24.15mins) completing the top three.

McAlinden, fresh off his win with Josh Wallis, set a new PB of 24.31 to finish fourth.

Once again, the overall winner was Spalding’s Josh Wallis – who finished in a stunning 53.27mins.

That was over 3.43mins faster than the second-placed rider Sam Bradley of Ellmore Factory Racing.

riders whose total times added together are the quickest.

Frazer Wallis picked up third place, whist Bowser finished in the bunch and Bettinson stayed the course with his group.