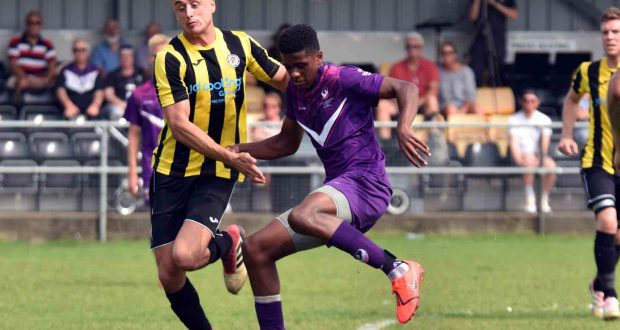 Danny Hussey has warned his Holbeach United side that their current levels of performance aren’t good enough.

The Tigers have won three games on the spin – scoring 13 goals in the process – but Hussey insists that they’re not currently looking good enough to challenge the Uhlsport UCL Premier Division’s leading sides.

This Saturday sees fourth-placed Holbeach make the trip to Leicester Nirvana (3pm), who are struggling in the bottom five after going down 6-0 at Shepshed Dynamo last weekend.

However, Hussey isn’t reading too much into Nirvana’s slow start and expects a tough test – especially after Saturday’s hosts won 8-2 at Lutterworth Athletic in the KO Cup on Tuesday.

He said: “I’m not sure what to expect from Nirvana if I’m totally honest.

“Obviously they lost 6-0 at Shepshed, but I see them as one of the league’s best teams.

“What I do expect is that it won’t be easy for us.

“We went there last season when we really needed to win and only managed a 0-0.

“This season, our levels just haven’t been consistently high enough.

“We’ve been OK against certain sides, but if we play like we have been against the likes of Shepshed, we’ll fall short.

“I’ve struggled to get a settled side out and that hasn’t helped, but I’m just waiting for that performance that I can come out and praise as the kind of showing I expect from this team.”

Hussey will have to do without in-form frontman Josh Ford on Saturday.

He’s joined on the sidelines by Adam Jackson and Ryan Oliver, while Joe Smith is still out.