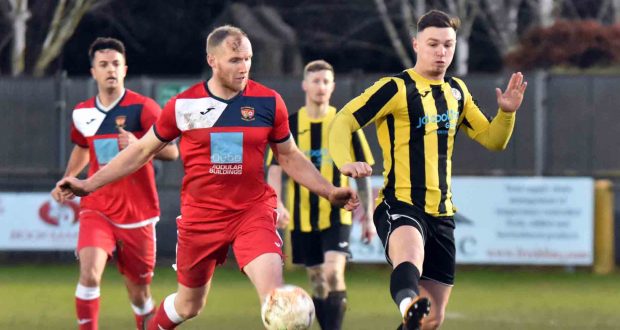 The clash at the DWB Stadium was called off on Monday due to damage from Storm Ciara and safety concerns – and will now be played this coming Tuesday (7.45pm).

Having battled hard to beat Loughborough University 1-0 in the KitmanUK Knockout Cup semi-final last Saturday, the Tigers had a host of players walking wounded.

However, they’ll now be able to rest up ahead of Saturday’s massive UCL Premier Division clash with Quorn at Carter’s Park (3pm).

Second-placed Quorn are four points clear of Holbeach in fifth, although Hussey’s men have three games in hand.

Victory would really enhance the Tigers’ position as title candidates – and the boss wants to see more of the same from his side.

Hussey said: “It’s a really big game for us on Saturday. With that in mind, having Tuesday’s game off was actually a blessing.

“We weren’t making much of it, but we had a few players missing and a few carrying knocks following the Loughborough game.

“I know Boston had a few out too, but we’d rather go there and beat their best team.

“We’re already in one final. If we can make it two, great. If we don’t, we’re already on-track for a better season than last time around.

“As for Quorn, they are a very good side. They have tricky wingers and a striker who is on big money, but scoring lots of goals.

“Hopefully we can make the pitch as bad as it was against Loughborough and play the same kind of game.

“They are used to playing on a 4G pitch, but the surface at Carter’s Park won’t be quite as good as that.

“We’re up alongside the likes of Quorn on merit this year, largely because we’ve got a settled side.

“If we can beat them, I still won’t say we’re among the favourites. But we’ll be well placed.”

Meanwhile, Holbeach midfielder Danny Setchell could be on his way to Deeping Rangers after they made a seven-day approach.

Setchell, who joined from Wisbech, has been frustrated by his lack of playing time.