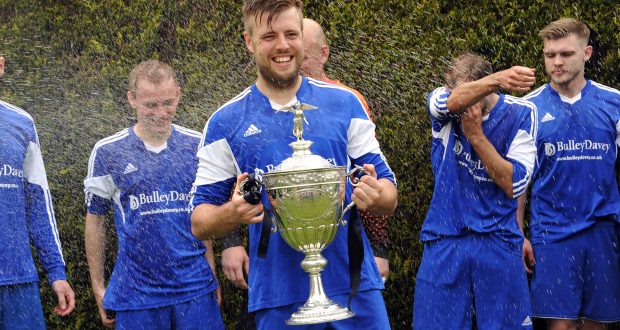 STEPPING DOWN: Ash Coddington (centre) is heading back to Moulton Harrox.

Pleased player/boss Tom Roberts is happy for his Holbeach United side to continue flying under the radar this season.

The Tigers have quietly gone about their business this campaign, going unbeaten in their five ChromaSport UCL Premier Division and Emirates FA Cup clashes.

This Saturday sees Holbeach welcome UCL Division One side Long Buckby to Carter’s Park for a UCL Knockout Cup tie (3pm), as they bid to go one better than last year’s final defeat.

Roberts sees the competition as one his charges can win – and he insists that he’ll play his strongest possible side against the Bucks, who are fourth in the second tier.

He said: “Obviously the aim is to win the competition, we went very close last year.

“We’ve got to give Long Buckby the respect they deserve, but they certainly are something of an unknown quantity for us.

“They’ve started well in UCL Division One, but we don’t know all that much about them.

“As far as we’re concerned, I’m happy for us to keep flying under the radar.

“Nobody is talking about us this season – and that’s how we like it. Let everyone keep talking about Peterborough Sports, Yaxley and Newport Pagnell.

“We know that we’ve got a very strong squad here and we know what we’re capable of.

“We’ll be respectful on Saturday and I’ll certainly be picking my strongest side.”

Roberts is without suspended skipper Jamie Stevens for the clash, while fellow defender Ashley Coddington has decided to step back down to play with PDFL Premier Division side Moulton Harrox after only a few months at step five standard.

Young guns Dan Dougill and Dan Worthington are also moving to Wisbech St Mary and Bourne Town respectively, with both on a loan basis.

Roberts admits that he’s disappointed by Coddington’s decision to leave. Despite his limited time on the pitch so far, the Tigers chief feels the defender hasn’t given himself enough time to do himself justice.

“It’s a shame Ashley has made the decision so quickly,” added the Holbeach supremo. “I would have liked to see him give it a good go.

“He’s a good lad and a good player and he’ll certainly go back to Moulton a lot fitter than when he arrived.

“Moulton is familiar for him and if that’s the way he wants to go then good luck to him.”

Holbeach are still without Adam Jackson (ankle) and Ollie Pinner (calf), but Jordan Thomas should be fit enough to play from the start against Long Buckby.