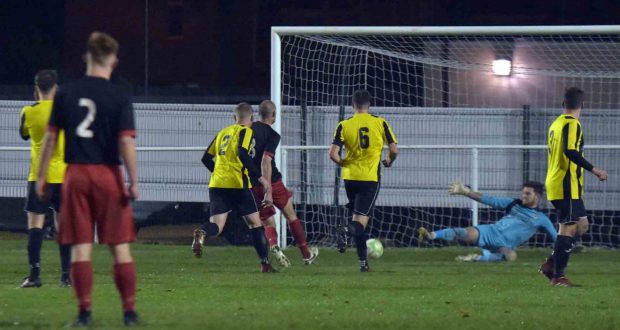 KEY MOMENT: Tom Mills slots home the only goal of the game for Rothwell Corinthians as they edged out Holbeach in a tight UCL KO Cup final. Photo by JAKE WHITELEY

Phil Barnes admitted that everyone at Holbeach United was “gutted” as they lost the 2019/20 KitmanUK League Cup final 1-0 on Wednesday night.

A solitary second-half strike from Tom Mills fired Rothwell Corinthians to a 1-0 win in a very tight final at Blackstones FC’s Lincoln Road ground – making it three final defeats for the Tigers in the competition since 2016.

Mills – who was also sent off late on – netted 25 minutes from time to settle the contest in Stamford, which was a rearranged final following the voiding of last season’s Uhlsport United Counties League.

Holbeach had a few good chances in the first half, with Joe Smith enjoying the best of them after going clean through on goal and forcing a smart save.

Fraser Bayliss also created a few opportunities on his debut, including teeing-up a half-chance for Luke Wilson.

Rothwell, however, missed a great chance ten minutes before the interval after Dodzi Agbemu’s great run and cross was somehow not finished by Craig Maisir from close range.

It was nip and tuck after the interval, but Rothwell grabbed the only goal when Mills benefitted from a Jon Fairweather clearance being blocked and calmly slotted home.

Mills then saw red seven minutes from time after an incident with Adam Jackson, before Bayliss almost levelled in the final minute when his shot at the back-post was expertly saved.

Barnes said: “It was an even game, in my opinion.

“It had 1-0 to either side written all over it from quite early on and it was Rothwell who got the all-important goal in the end.

“The first half was very frenetic, although we did have our best chance when Joe Smith went through one-on-one early on.

“But we had more chances in the second half and their keeper ended up making a few really good saves on the night.

“Their goal was a bit scrappy, too. It was a free kick into the box and our clearance was charged down and fell right to their midfielder, who just finished it off from quite close range.

“I think it was always going to be that kind of rub of the green that settled the game and it went their way.

“The club has lost a few close finals in recent times and they’ve all been that close.”

Having lost to Peterborough Sports in 2016 and Daventry Town in 2018, Holbeach haven’t had much luck in this comeptition in recent times.

Barnes revealed that he asked former boss Danny Hussey, who steered the Tigers to the final, to be involved in the management team on the night.

But even a few motivational words from the popular ex-chief couldn’t prevent another loss, which Barnes admits left everybody feeling down in the dumps.

He was, however, keen to take the positives and was pleased to see Bayliss – signed from Boston Town 48 hours before the final – make his debut.

“I actually asked Danny if he wanted to be involved in some way on the night,” added Barnes. “But he just came to see everyone beforehand and spoke to us all, which was nice.

“Despite this being last season’s final, we still had many of the players who helped the club get here and of course we’re all gutted about the result.

“We didn’t see it as a bonus game, it was something we’d earned and we wanted to win.

“There were some positives; I thought Fraser Bayliss settled in nicely and performed well on the night.

“He’s obviously a great option for us and I’m looking forward to seeing what he achieves moving forward.”

With the 28-day suspension of the season now in effect, Barnes has also repeated his belief that football won’t return immediately after the English lockdown is lifted.

But he will ensure that his players are fit and ready for that to happen, with a fitness plan to be put in place.

“We’ve asked the lads to stay in shape and are putting together a fitness regime,” he added. “Whether we are back at the start of December is another question.

“I stand by my opinion that it looks doubtful, but we’ll have to wait and see.

“There are many, many more important things in the world than football and we don’t need to be prioritising its return over safety.”