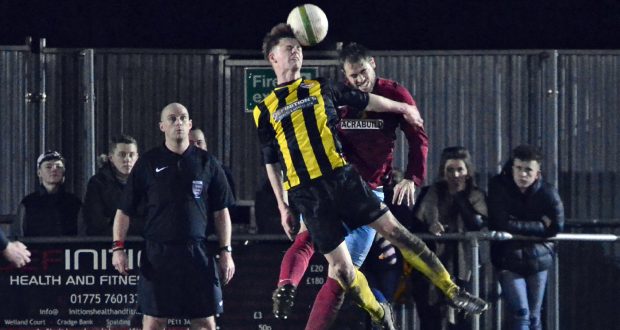 Teenage midfielder Dougill fractured both his tibia and fibula in the second half of the Tigers’ ChromaSport UCL Premier Division game with Cogenhoe United.

Holbeach were losing 2-0 at the time, but the referee abandoned the game due to the severity of the injury.

Dougill, who has had surgery, is expected to miss up to a year – but has been told he’ll play again.

Hayes, who was first on the scene, admits it was a “terrible moment” and insists that the officials made the right call.

He said: “I’ve seen leg breaks before, but this was the worst. It was terrible.

“It shook us all up emotionally and Dan was visibly distressed. I had to tell him that his leg was broken and that it was bad. He was fine after that, to be fair to him.

“We just had to make him comfortable and keep him warm.

“I know the referee was conflicted about what to do, but I think he made the right call. It’s easy for me to say, but I’d have accepted it if it was the other way around.

“It was a harrowing experience for all of my team and we couldn’t have played on.

“I can understand Cogenhoe were disappointed, but they seemed to accept the situation after we spoke.”

With Dougill guaranteed to miss the rest of the season, Hayes has confirmed his interest in former Spalding United skipper Adam Jackson, who left the club this week.

Hayes insists that Jackson would improve his squad and feels he’d be a positive influence on the dressing room – but is adamant that it’s far from a done deal.

“If Adam wants to come here on the money we can offer that’s great,”added Hayes. “If we can make it happen, we will.

“I’m sure he could play for teams higher up – and on better money – but Holbeach is a club close to his heart. We’ll see, I’m definitely interested.”