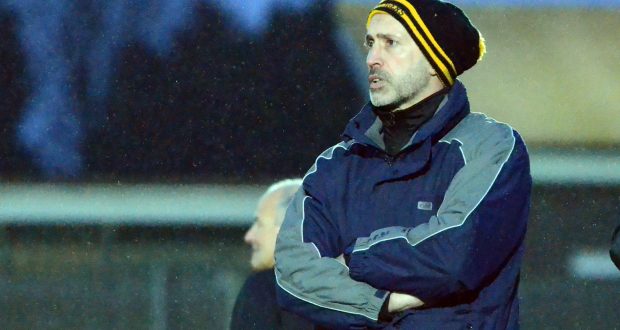 BACK IN BUSINESS: Danny Hussey is itching for a fixture. Photo by JAKE WHITELEY

Frustrated Holbeach United boss Danny Hussey admits that having back-to-back fixtures postponed has sent him back to square one.

Hussey, who took over at Carter’s Park in early January, has yet to witness his fifth-placed Tigers lose a Future Lions UCL Premier Division fixture – but has seen games with Eynesbury Rovers and Boston Town postponed in successive weekends.

That will be tested over the next week, with Holbeach facing a trip to Northampton ON Chenecks on Saturday (3pm) and the rearranged Eynesbury visit on Tuesday night (7.45pm).

The Holbeach chief does have a full squad to pick from, however, with striker Jack Smith set to start after completing his switch from Pinchbeck United and both Ricky Drury and James Tricks fit to feature (both would have missed last Saturday’s postponed derby with Boston Town).

“It’s obviously not ideal to have two weeks without a game,” said Hussey. “We weren’t even able to train last week, so it was a bit of a waste really.

“In many ways, we’ve got to start again. We were on good form in the league and I’ve been happy with the start we’ve made since I took over, but we’ve got to get going again now.

“Chenecks are a side I don’t know an awful lot about if I’m perfectly honest. They’re down towards the bottom, but that means nothing in this league.

“We need to go there and work hard as a minimum, then hope that our quality shines through on the day.

“We’ve got a full squad and Jack (Smith) will be in the side, so that gives us something a bit different.

“We need a good training session midweek to re-focus everybody for Saturday’s game.”

Tuesday’s trip to Eynesbury is the harder of the two fixtures and was one of the two matches Holbeach saw postponed (January 26).

There was much scepticism from the Tigers at the nature of that postponed fixture, but Hussey insists that it won’t give his side any extra motivation to win the clash.

He added: “It’ll be a very hard game – let’s hope that the raincloud has left their ground this time.

“All joking aside, it makes no difference to me why they called the game off. If they had lads missing for the original date, I’d rather we went there and beat them when they have a full side.

“We’ve got no problem with them and are looking forward to the game. It’ll be 11 versus 11 and we’ll hopefully go there with a full squad too.”

There’s a chance that youngster Reif Clarke won’t be involved in either game, with higher-graded St Neots Town eyeing up a swoop for the teenager (he was named on their bench on Tuesday).

Hussey admits that he’s spoken to Clarke and the midfielder wants the chance to try his hand at step three football – and the boss has no intention of standing in his way.

But the Tigers supremo does expect St Neots to go about the business in the right way, having not yet received an approach for his player.

“I was asked if I’d waive the seven days,” added Hussey. “I found that funny, because we’ve not yet had an approach for Reif.

“I like to do things the right way and I expect the same in return. If St Neots want to take Reif, we’ll not stand in his way – the same applies to any player who wants to go higher up the leagues.

“But there’s a right way to do things and St Neots need to speak to us about it.”