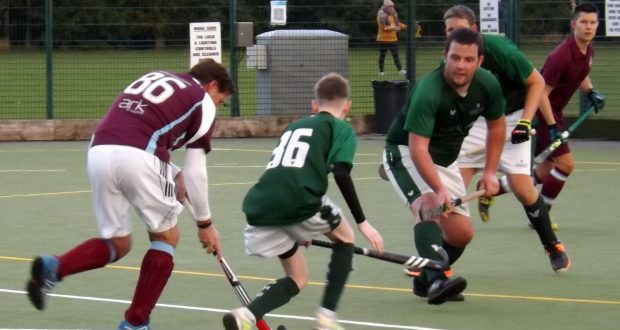 LIVELY DERBY: Spalding 4th players on the ball in the 3-3 draw against Long Sutton 3rd. Photos by NIGEL COOKSON

Spalding 1st climbed up into fourth place in East Men’s Hockey League Premier B after a superb 7-0 win over Waltham Forest 1st on Saturday.

A Jacob Baker hat-trick was the catalyst for the rampant victory at Glen Park, with the mighty maroons making it three wins from six league games so far this season.

Stuart Cunnington, Joe Higgins, Glenn Richardson and Tom Amess all got in on the act for Spalding, who are eight points behind flawless early pace-setters East London 1st and Blueharts 1st.

Down in Division 3NW, Long Sutton 1st remain top of the pile despite having to settle for a point at Cambridge South 2nd after blowing a 2-0 lead.

Sutton struck first when a ball from Josh Fyson found Baker waiting in the D.

He slid the ball to his right and, with a backhand shot, watched the ball fly into the top right corner. Jimmy Harrison was the next to feed Baker, who raced through to bury his second.

South knicked one back just before the break, though, before levelling things up with a well-taken penalty corner early in the second half.

Both sides had chances to win it, but it was Baker who fired the best of them over the bar late on.

Also in 3NW, Spalding 2nd maintained their unbeaten start to the season with a 3-3 draw against March 1st.

All three of Spaldings goals came from the stick of Robin Edlington but, despite leading three times, they were unable to see out the game at Glen Park.

Long Sutton 2nd, meanwhile, grabbed their first win of the season in the same division as they triumphed 3-1 over St Ives 2nd at the Peele Leisure Centre.

After they started slowly, St Ives grabbed an early lead.

But Sutton levelled through Will Taylor from a well-worked short corner.

The hosts soon moved 2-1 ahead when Taylor bagged his second, before a great finish from Dominic Ibrahim wrapped up the victory.

In Division 5NW, Spalding 3rd suffered their first league loss of the season as they slipped up 2-1 at home against City Of Peterborough 6th.

Michael Morris was the Spalding scorer, but they fall to fourth in the early standings.

Down in Division 6NW (N), leaders Long Sutton 3rd and Spalding 4th battled out a 3-3 draw at Glen Park.

Spalding scored first, but Gary Hales’ finely-struck effort squared the game up before Troy Croxford’s back-post finish fired the visitors ahead for the first time.

Spalding hit back for 2-2, but a great strike from Luke Proctor put Sutton back in front in the closing stages.

But a late leveller ensured that the derby spoils were shared, leaving Sutton a point clear of rivals Spalding 5th at the summit, albeit having played a game more.

It was a day to forget for Spalding Poachers in Division 3NW, as they went down 5-0 at Cambridge City 5th.

The defeat leaves the Poachers down in ninth place with one win from four matches so far.

In Division 4NW (N), meanwhile, Spalding Poachers 3rd slipped to a 2-0 defeat against City of Peterborough 4th at Glen Park.

There was even worse news for Long Sutton ladies’ 2nd, as they were thrashed 7-1 by Bourne Deeping 2nd despite a Wendy Canham goal.

Spalding are now fourth, with Sutton six points back in seventh.