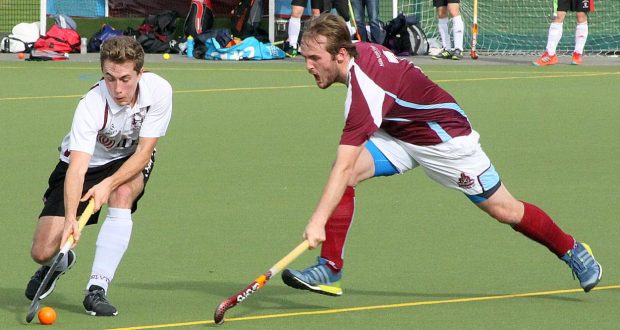 DRAW: Spalding 1st battled back for a point. Photo by MARK LE SAGE

Ahead of the clash of two of last season’s promoted sides, both needed to build on their haul of just one point from seven games – but in the end they had to settle for a share of the spoils in Hitchin.

Both sides started strongly and had a chance each within the opening minutes. Liam Brazier went close for Spalding, then Nathan Davy was forced into a fine save at the other end.

It was the home side who opened the scoring as a slip in the defence created an opening to break the deadlock.

Minutes later and Spalding were awarded a penalty, but Connor Allen’s fluffed his lines and his side went in 1-0 down at the break.

The second half saw Spalding move up a gear as they pushed harder for an equaliser.

This opened up the game considerably, and as Blueharts played on the counter started to create chances of their own.

Despite a growing amount of pressure, an interception led to a breakaway and a superb finish gave Blueharts a second goal with 20 minutes left on the clock.

The Blueharts keeper continued to play a blinder and kept Spalding at bay, but eventually the defence succumbed to a Stuart Cunnington elusive penalty corner strike which gave the visitors some hope.

Spalding’s possession increased further, but they still looked vulnerable on the break and should have conceded had the right pass been made.

However, a Spalding penalty corner on the stroke of full time was illegally stopped on the line by the defender and a penalty awarded. Up stepped teenager Rogers to calmly slot the ball home and clinch a point.

This Saturday sees the strugglers entertain top of the table and former National League Champions St Albans at Glen Park (11.30am).

Elsewhere, Long Sutton 1st slipped to a 3-0 loss at Old Southendian 1st in Division One.

A couple of excellent goals from Glenn Richardson and Joe Higgins couldn’t stop them trailing 4-2 at the break, while Richardson added another in the second half.

In the same division, Spalding 3rd suffered a humbling 17-0 reverse at Kettering 1st.

The absence of several key senior players meant that Spalding’s young lads were ruthlessly put to the sword.

Meanwhile, Spalding 6th were edged out 3-2 by Alford 2nd in Division 6NW (N).

Dean Crookell and Richard Gater got their goals, but a late strike denied them a deserved point.

On Saturday, the Poachers won 2-1 at St Ives 2nd in East Women’s Hockey League Division 2NW thanks to goals from Karen Timby and Evie Maltby.

Not done there, the women then saw off hosts Cannock 1st in the Investec Adult Women’s Tier 2 Championships.

First-half goals from Macy Carr and Maltby secured a sensational win against the odds.

Long Sutton 1st, meanwhile, were turned over 3-0 by CoP 2nd in Division 2NW as they suffered only a second league loss of the season so far.

Lauren Spenceley opened the scoring with her first goal for the club, then Eva Keyes settled the contest.