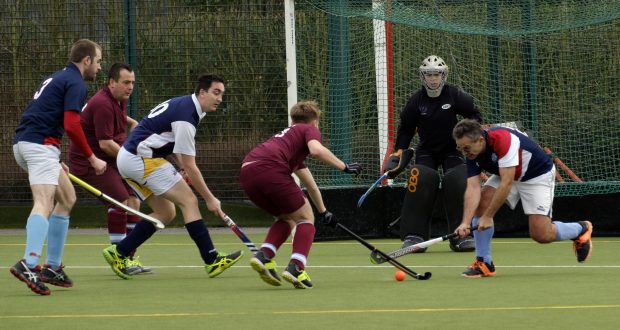 GET STUCK IN! Ben Scholes in action for Spalding 3rd on Saturday. Photo by KEN SMITH

Spalding Poachers shot out of the East Women’s Hockey Division 2NW relegation zone with a much-needed 3-2 win over Cambs Nomads on Saturday.

Also securing a welcome win in the same division were fellow strugglers Long Sutton, who edged out Newmarket 1st 1-0 thanks to Charlie Leuty’s goal.

The South Holland duo are now level on points with each other, but just a solitary point above the bottom two.

For Spalding, Player-of-the-match Sullivan netted twice in the first half to give them a 2-1 lead.

The second period was scrappy and Poachers lost Zoe Moore to injury before the away side levelled.

However, Haunch showed composure beyond her years to slot the winner late on.

Sutton also had to work hard for their points, with the winning goal coming in the final 15 minutes when Hannah Baker teed up Leuty to score on her reverse stick.

It was a day to forget for Spalding Poachers 2nd down in Division 3NW, however, as runaway leaders Saffron Walden ladies’ 1st won 11-0.

With half a team missing, Spalding did create chances and narrowly missed out on being the first team to score against the table-toppers this season.

Table-toppers Wapping 2nd handed the Maroons a 7-1 reverse at Glen Park in a game that saw Jacob Baker dislocate his knee.

Despite falling 2-0 down early on, drag-flick specialist Stu Cunnington had hauled Spalding back into the game at 2-1 before Baker’s knock saw him taken to hospital.

The second half started with Wapping shutting the door on the Spalding comeback with an early goal, before they added four more to secure a hefty win.

The loss sees Spalding remain just outside of the bottom two on goal difference.

In Division 2N, a double from Alex Canham failed to stop Long Sutton 1st from going down 5-2 at City of Peterborough 3rd.

It was a better day for Long Sutton 2nd in Division 4NW, who maintained their sizeable advantage at the summit by battering Kettering 2nd 7-1.

Some 24 hours later, George Swindells’ second-half goal then gave the 3rd side a 1-0 win over the 2nd team in an all-Spalding showdown.

There was also a 5-2 loss for Spalding 4th at Cambs City 6th in Division 5NW.