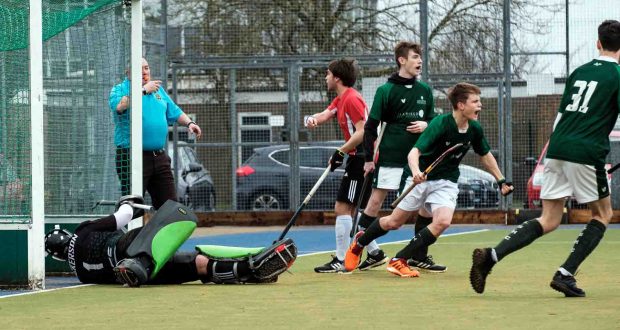 GET IN! Long Sutton celebrate after scoring one of their goals. Photos by KEN SMITH

Hockey round-up: Long Sutton jump off the bottom after taming the Dragons

The victory, secured by goals from Jacob Synnott and Josh Baker, moves Sutton off the bottom of the table for the first time since the early weeks of the season.

Sutton were second favourites as they welcomed high-flying Norwich to the Peele Leisure Centre on a day when every other fixture involving the club’s sides was postponed due to the weather brought in by Storm Dennis.

The hosts made one change from the side that defeated Horncastle 1st the week before, with Nick Ellis replacing Dan Batten in a like-for-like midfield swap.

The match started at a high tempo, with Sutton taking the game to Norwich in what was a good quality match sportingly contested by both teams.

Chances came for both teams, but the home side had the majority of the game and enjoyed the better of the opportunities as Baker, Alex Canham, Will Taylor and James Collingwood-Smith all had openings that, on another day they would have converted.

With the Norwich keeper on fine form, it began to look like it would be scoreless at half time. But, after some good build-up play, Jacob Synott scored a deflected goal to give Sutton a vital 1-0 lead at the break.

Captain Stefan Fox gave his usual encouraging team talk and the second half began with Sutton once again on the front foot.

But the defence of Fox, Tom Baguley, man-of-the-match Tom Burton, keeper Bard Whitmore and Harry Synott were excellent in earning their first clean sheet of the season.

Harry Synott, playing his last game for a while as he heads off to travel the world, was as solid and assured as he had been in all of his previous games – the team wishes him well and will certainly miss him.

The game carried on with Sutton having the majority of it and it was well-deserved when Baker finished well to give the home team a cushion five minutes from the end.

This was as good a win as the team has produced this season and Sutton will continue to see out the season with pride and fight.

With Dereham 2nd now bottom, 11th-placed Sutton are just two points off ninth place but remain very much in the relegation fight.

The only other fixture contested by a South Holland team came in Division 5NW, where free-scoring Spalding 4th were once again in sensational form.

Fresh off the back of an 8-1 success over Cambridge City 6th the previous weekend, they repeated the trick in their game at rivals Bourne Deeping 5th.

Jack Martin was the star of the show for the mighty maroons as he helped himself to a hat-trick at Arthur Mellows Village College.

He was joined on the scoresheet by Tim Amess, David Burrell, Oliver Smith, Harry Blackman and Cameron Roy as Spalding moved up to fifth in the standings.

They are 11 points behind leaders City of Peterborough 6th, but are just seven off the top three.