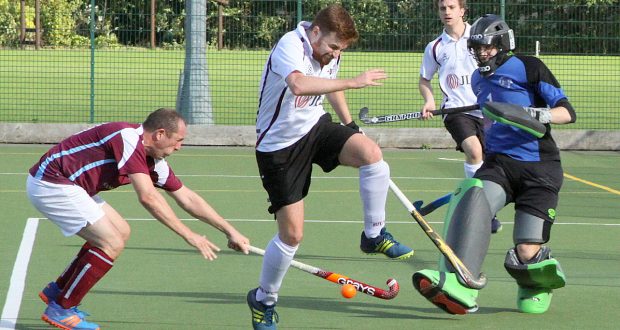 IN ON THE ACT: Steve Rogers (left) netted for Spalding 1st. Photo by MARK LE SAGE

On Saturday, Spalding suffered a 4-3 loss at Ipswich 1st before suffering last-gasp heartache in a 3-2 reverse against Letchworth 1st just 24 hours later.

The first clash saw an experienced Ipswich side hold on to win this crucial relegation battle to give rock-bottom Spalding an even harder task of staying up.

Trailing 1-0 at the break, depleted Spalding were the better side before and after the interval, but they failed to take their chances and soon fell 2-0 behind.

However, Robert Dalton muscled his way through to liven the game up at 2-1, but some fragile defending saw the visitors concede a third.

Stuart Cunnington’s short corner reduced arrears once again, but Ipswich were gifted a penalty with ten minutes to go to once again increase their lead.

Matt Day did pounce at the far post to give Spalding a chance in the final five minutes, but they failed to find a leveller.

More heatbreak was to follow at Glen Park on Sunday. Steve Rogers fought his way through to open the scoring and give Spalding a 1-0 lead, but a well-taken short corner from Letchworth reduced arrears.

Dalton put the home side ahead once again, only for a Letchworth penalty to level scores again going into the break.

The second half passed by without further major incident, until the visitors pinched a winner in the final minute to break Spalding hearts and deny them a share of the spoils.

In Division One, Long Sutton 1st picked up a 2-2 draw against Sudbury 1st to haul themselves off the foot of the table.

Down in Division 3NW, Spalding 2nd picked up a morale-boosting 2-0 victory at City of Peterborough (CoP) 5th. The goals came from captain Dan Adams and Pete Wright, with Danny Dorey the man of the match.

Spalding 3rd, however, were walloped 8-0 at home by Bourne Deeping 2nd.

It was a good day at the office for Spalding 5th in Division 6NW (N), too.

They picked up a 4-0 success at CoP 8th, with Jack Martin (2), Henry Thorogood and Daniel Plant all getting in on the act.

In the same division, Long Sutton 3rd saw their promotion hopes suffer a dent as they could only manage a 2-2 draw at lowly Wisbech Town 4th.

Basement side Spalding 6th have seen all of their results over the season voided and they are no longer active in the division.

The first half of the East Women’s League Division 3NW clash was goalless, but in the second period it was Spalding who proved that they are the stronger outfit.

Bunyan calmly slotted the ball into the back of the net soon after the restart, filling the team with immense confidence for the rest of the derby.

A strong ball from Eva Keyes resulted in a CoP defender diving for a goal line save, thus awarding the Poachers a flick.

Bunyan stepped to the penalty spot and powerfully flicked the ball in the bottom left hand corner, resulting in a 2-0 win to Spalding and clinching her the well-deserved title of player of the match.

There was better news for Spalding Poachers in Division 4NW (N), though, as they beat Woodhall Spa 1st 4-0 at Glen Park.

From the beginning of the game to the very end, Spalding kept the pressure on their opponents.

The Poachers took an early lead and, by half-time, they were 3-0 up with goals from Rachel Perkins, Amy Naylor and Mia Dewing.

In the second half, they kept the pressure on and managed to make it 4-0 with a great strike by Sharon Amess.

Overall, the team did extremely well and hope to keep up the good work.