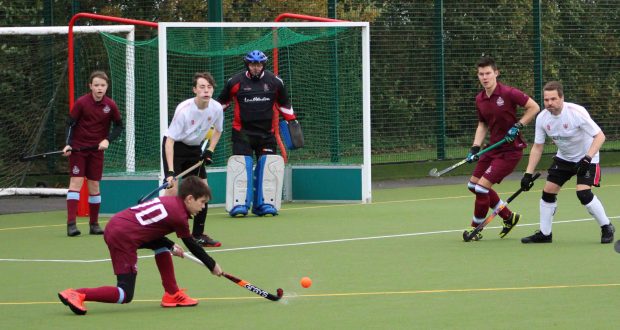 After three defeats and a draw from their first four Division 2NW fixtures, the Poachers earned a much-needed 2-1 triumph at Glen Park to kick-start their campaign.

A heavy downpour delayed the start, but the hosts started well and Maddie Haunch capitalised on the early pressure with a deft finish after just three minutes.

The visitors levelled, but Spalding were the better side and restored their lead when Caly Priestley’s shot was stopped by a defender’s foot with the keeper beaten and the player-of-the-match put away the resulting penalty stroke.

Down in 3NW, Spalding Poachers 2nd slipped up 1-0 at City of Peterborough 3rd thanks to a first-half penalty flick.

Josh Baker was the star of the show with four goals for table-topping Sutton, while Brad Sargeant (2) and Josh Fyson also got in on the act.

Sutton go into the month-long lockdown as one of three teams on 14 points.
In the same division, Spalding 2nd suffered their first defeat of the season as they slipped up 1-0 at rivals Long Sutton 2nd.

After a goalless first period at the Peele Leisure Centre, the game had the feel of one that would be settled by a solitary strike.

As the half moved on, both sides applied more pressure and, when McKenzie East won a short corner, Stefan Fox slipped it to Sam Gray – whose well-struck shot was hit with precision to settle the contest.

Spalding fall to fourth, with Sutton 2nd down in ninth.

In Division 5NW, Spalding 3rd continued their impressive start to the season with a 4-2 victory at Cambridge South 4th.

Jacob Drew was the star of the show with a deadly hat-trick, while fellow forward Michael Morris also notching to secure the points.

The big winners of the week were Spalding 4th, who romped to a stellar 7-0 success over rivals Wisbech Town 4th at Glen Park.

Ollie Dring and Oliver Baker both bagged doubles in the home victory, while Jack Martin, Adolfo Chantre and Harry Naylor completed the rout in fine fashion.

That leaves Spalding third in the standings – some four points behind leaders Long Sutton 3rd, who were without a fixture.

Spalding 5th, who are fourth in the table, were also on a rest week.

All hockey now goes into a 28-day suspension in line with the national lockdown. More on that here.