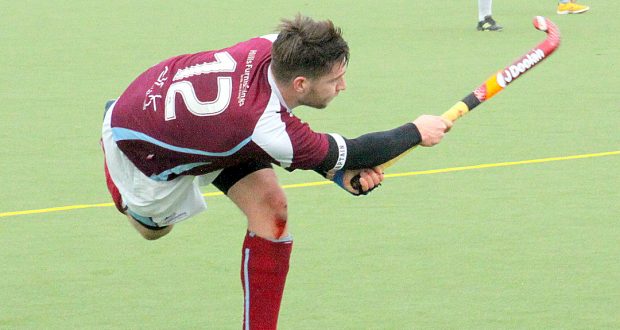 Spalding 1st are still searching for their first win of the East Men’s Hockey League Premier A season after suffering a 6-0 derby reverse against City of Peterborough (CoP) 1st on Saturday.

With CoP chasing the title and promoted Spalding bidding to launch some kind of battle for survival, there was much to play for at Glen Park.

A second-minute penalty got the City boys off to a perfect start and forced the hosts onto the back foot for the opening period.

Tireless work by skipper Josh Rowbottom, Rob Dalton and Stuart Cunnington in the midfield brought Spalding back into the game and they put together some neat moves.

The visitors’ defence was well organised and gave Spalding’s forwards little opportunity near the circle.

A couple of strikes late in the first half gave the visitors a 3-0 lead at the break.

Needing a goal, the hosts pressed forward and forced a few short corners but were unable to convert. With just ten minutes remaining, Spalding were still hopeful of closing the gap but a couple of goals within a minute sealed their fate.

City added a sixth before the end to keep their promotion hopes alive – and make it 11 defeats from 13 games for Spalding.

In Division One, Long Sutton are now rock bottom after suffering a hefty defeat of their own.

There were beaten 4-0 at Cambridge Nomads 1st, who are only two places above them in the table.

In Division 3NW, both Spalding 2nd and 3rd also slumped to heavy losses.

A 9-0 home walloping against Cambridge City 4th ensures that Spalding 2nd remain in the bottom three.

Cambridge were strong in defence, catching Spalding in possession and marking players out of the game.

Fast passing and clinical finishing split the Spalding defence relentlessly, with Cambridge leading 5-0 at half-time, going on to win the match 9-0.

Meanwhile, the 3rd team suffered a 5-2 loss at CoP 4th to stay bottom of the pile.

Although they trailed 3-0 at the interval, Spalding started the second half much the stronger and were rewarded with two clinical short corner strikes from Jeremy Watt.

They pushed for a leveller, but two late goals by Peterborough gave them a flattering victory.

Tyler Hagan (2), Gary Hales and Sam Markillie got the goals to keep Sutton fourth in the table.

Down in Division 5NW, Spalding 4th romped to a super 7-4 success against St Neots 3rd and are now just four points off second place.

Ben Scholes finished with aplomb to make it three, but a short corner got St Neots back into the game.

Although Willson scrambled home his second soon after, a rebound strike got the visitors back in the game at 4-2 at half time.

After the break Max Bodimead restored Spalding’s three-goal advantage, then things got interesting when the away side notched twice to bring the score to 5-4.

A late rally sealed the points though as Willson completed his hat-trick when he finished from a save off the visiting keeper and Alex Cunnington scored following a through ball from Scholes.

In Division 6NW (N), Long Sutton 3rd were given a free pass as Spalding 6th conceded their derby clash.

There was better news for Spalding 5th, as they picked up a 3-2 victory over Bourne Deeping 6th.

Jack Martin and Matthew Gedney got the home team off to a good start with early goals.

Bourne/Deeping fought back to reduce the arrears, but newcomer Henry Thorogood rounded off an excellent debut with a goal to seal the points.