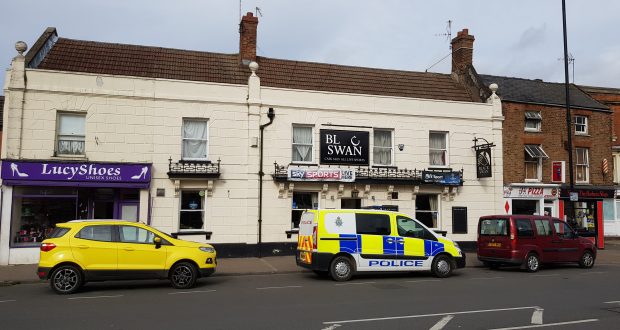 A Spalding pub has had its premises licence revoked after police found high readings of cocaine a year after it had been instructed to enforce a zero-tolerance policy.

The Black Swan at New Road was under scrutiny today (Thursday) after a police visit in July this year found high readings of cocaine.

Further investigation found conditions applied to its licence after a 2018 review had not been adequately adhered to.

The Panel of the Committee of the Licensing Authority, chaired by Coun Harry Drury, heard from Lincolnshire Police and the South Holland District Licensing Team that both authorities recommended the licence be revoked.

Sgt Kimble Enderby of Lincolnshire Police said during the hearing that The Black Swan had not listened to repeated help offered in licence conditions compliance, nor the new conditions added to the licence at a hearing last year.

“Little or nothing – and certainly not enough – has been done,” he told the Panel, adding: “By anybody’s benchmark they have failed to uphold the licensing conditions and offered no real explanation as to why.

“This lack of action alongside the issue of non-compliance is what led to a review last year… we discovered a catalogue of failure to implement existing conditions on the licence, as well as the new ones.”

Sgt Enderby said on the same date as the July drugs testing, police used the itemiser machine at The Ivy Wall pub on New Road.

By comparison, he said the staff at that pub “are doing what they should be doing so the readings were much less, despite footfall being two or three times more than The Black Swan on a Friday or Saturday night”.

In defence of the claims, Mr Parr said he and his staff had taken action, including installing CCTV cameras in the toilets, to what Shaun Moyses said was to the detriment of the pub.

Mr Parr, who told the Panel that he is planning to leave the pub, said: “Takings have gone down, down and down because we’ve kept the wrong’uns and the dealers out.”

After the 2018 review, only Mr Moyses received drugs training – until two more staff members were trained more than a year later in July 2019, after the police visit.

Mr Parr said: “We’ve not done our best but probably 90 per cent of what we could have done.

“We’re all learning and we can all improve.”

Mr Parr also disputed the police evidence, suggesting that the force should watch the CCTV footage to find video of people taking cocaine in the pub.

He suggested the readings might be down to people sweating cocaine out of their pores while in the pub – a theory Sgt Enderby said was impossible, given the high readings which could only imply surfaces had direct and regular contact with the drug.

The decision notice by the Licencing Panel concluded: “Even today, the required written policy required to demonstrate a zero tolerance approach to illegal drug use was described as being completely inadequate by the responsible authorities.

“Due to the failure to promptly implement the conditions imposed at the last review hearing, it is felt that the addition of further conditions would serve little purpose.

“The Panel were unimpressed by the current management of the premises and felt that only a minimal amount of effort had been put into seeking to resolve the longstanding problems at this venue in respect of drug use.”

The licence revocation is subject to appeal and the ban on alcohol sales at the premises will come into effect in November, depending on whether an appeal is lodged.