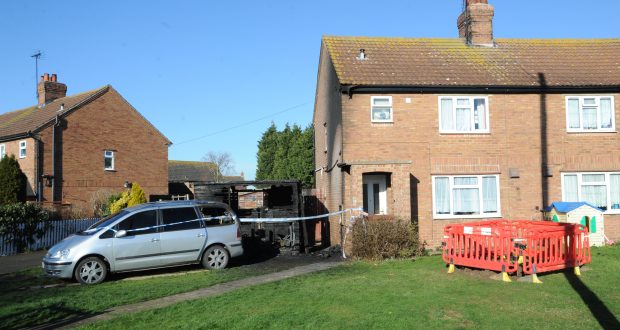 A hero neighbour helped save lives after two suspected arson attacks within minutes and yards of each other on Weston Hills homes.

The local resident, who does not wish to be named, helped evacuate a couple and a family including three young sons from the two separate properties around 100 yards apart on Old Fendyke Road in the early hours of Wednesday, January 30. 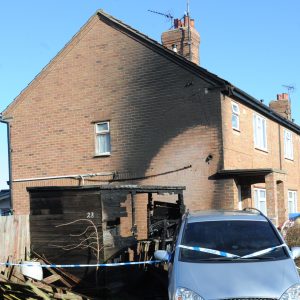 The couple’s garage, built into their detached home was the first to be reported with a 999 call at 2.49am.

Nine minutes later, at the other end of the road and opposite Weston Hills Primary School, a shed next to the young family’s home was reported alight.

Neighbours described hearing a loud bang and seeing flames almost as high as the house itself coming from the shed to the left of the property.

One neighbour, who lives at the Spalding end of the road told The Voice: “I was watching TV at around 2.45am when I heard a low thud which I thought was abnormal.

“I looked out the windows and saw flames coming through the garage doors.

“I ran over there and knocked on the door. The couple that live there were fast asleep but I managed to wake them up and they got out.

“Then I looked down the street and could see these huge flames near a house further down the road. I just though ‘this isn’t normal’.

“I ran down the street to that house and it seems like I went in the back just as the family came out the front. The dog was still in there though and is now fine.

“There’s one lady and three young lads who were all just stood outside in their boxer shorts. I went home to get some clothes for them, but the other neighbours had clothed them by the time I’d got back.

“I’m sure what I did is what anybody would have done. 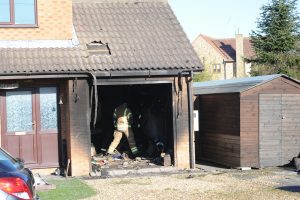 Crews from Spalding, Boston and Holbeach stopped the garage blaze from spreading to the rest of the house using two hose reels, two breathing apparatus and two thermal imaging cameras.

Another crew from Spalding joined colleagues from Crowland at the separate fire down the road, close to Weston Hills School.

That fire also damaged a vehicle parked alongside the shed.

Lincolnshire Fire and Rescue said investigations had confirmed the fire in the shed was started deliberately, but the cause for the garage fire was “undetermined”.

Lincolnshire Police say they’re treating the incidents as arson and have increased patrols in Weston Hills to ease any concerns local residents may have.

A spokesman for the police said: “Both incidents are being treated as arson.”

Inspector Gareth Boxall of Spalding Police, said: “We worked with fire investigators on the day to examine both scenes.

“Our Criminal Investigation Department continues to follow a number of lines of enquiry.

“We have had no further similar incidents since the two in Weston Hills, but officers have conducted increased patrols in the Weston Hills area nightly as a precaution.