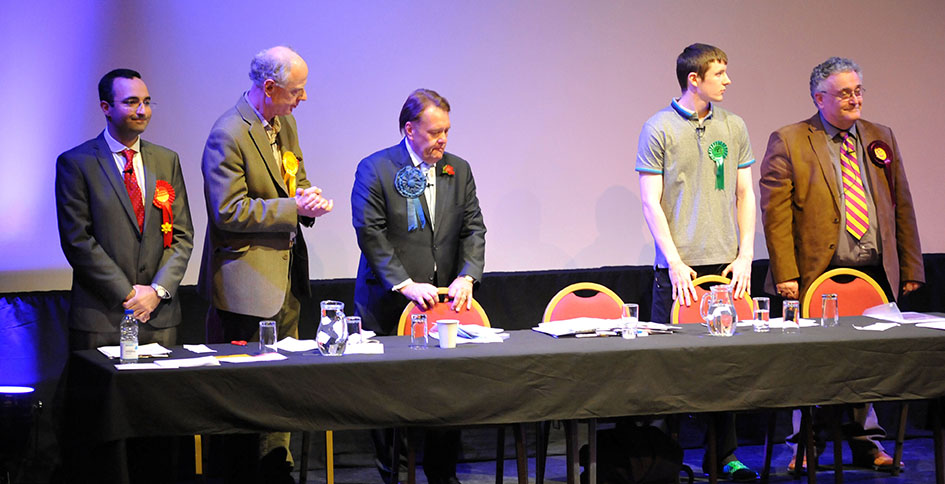 Hayes: I would resign from government if no EU referendum or if Conservatives go into coalition with UKIP

John Hayes says he would resign from the government if he is re-elected as MP for South Holland and The Deepings and David Cameron does one of two things Mr Hayes is staunchly against.

He told a hustings event in Spalding on April 23 that he would stand down if Mr Cameron reneged on his offer of a referendum on Britain’s membership of the EU. And Mr Hayes vowed that he would also go if the Conservatives win a majority on May 7 and go into coalition with the UK Independence Party.

More than 200 people listened to all five Parliamentary candidates for the seat make their pitches and answer questions in the Spalding Guardian event.
Mr Hayes and fellow candidates Matthew Mahabadi (Labour), George Smid (Liberal Democrats), David Parsons (UKIP) and Dan Wilshire (Green Party) each gave a three-minute opening statement. Mr Hayes and Mr Parsons were given rousing receptions, but it’s fair to say that many in the auditorium warmed to the other three, arguably lower-profile, candidates during the evening.

Mr Mahabadi used his speech to say how he was close to some of the issues seen as key in this election.
“I’ve worked on minimum wage. I’ve been unemployed,” he said. “And I know what it’s like to be alienated because of a difference – in my case, the colour of my skin.”

Mr Smid insisted: “All of us here are liberals. We want to achieve, and don’t want to be told what to do.”.
He claimed Mr Cameron doesn’t know the difference between debt and deficit and that the country is stuck in 19th century politics.

Meanwhile, Mr Hayes used his platform to say that the election was principally about two issues – “quality of representation” for the constituency and who will govern Britain for the next five years.
He said: “Who wants to take a risk with Labour, possibly propped up by the SNP?”
Mr Hayes made great play of having lived in the constituency (Moulton) since just before he was first elected in 1997.

However, Spaldonian Mr Wilshire – who turned 19 last month – got off to a great start with the audience when he announced that he has lived in this constituency the longest of all the candidates.
The university student went on to say that it was unfair that tuition fees have been “lumped onto my generation by people who don’t have to pay them”.

Then Mr Parsons took his turn to say that UKIP stands for a different kind of politics.
“The established parties have not a lot to offer,” he added. 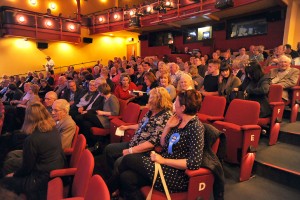 The first of the questions was on local education and asked if candidates had visited any schools.
Only Mr Hayes was able to say he had, but ex-Pinchbeck East Primary School student Mr Wilshire was able to point to having seen issues with large class sizes having recently left Spalding Grammar School.
Mr Parsons pledged to visit schools during the campaign and Mr Mahabadi has nieces at Weston Hills Primary School.
One of Mr Smid’s children has just left school so he has “a good overview”.

Hospital parking charges were brought up and, although Johnson Community Hospital doesn’t charge – and cannot due to a planning condition – there was anger over bus operator Brylaine pulling its stop there.
Mr Hayes vowed to continue to campaign to see it reinstated.
Mr Smid suggested older people should be exempt.
Mr Parsons says UKIP would scrap charges, but Mr Mahabadi slammed his suggestion that it could be funded from EU exit as “barmy”.
Mr Wilshire said a fix was needed, adding: “If hospitals are having to raise this kind of money it shows we have a funding problem.”

A hot topic was street drinking. An audience member insisted it was linked to the arrival of foreign nationals.
Mr Hayes pointed out that he had acted to stop people drinking in Hall Place and it was not just foreign nationals emerging from pubs and clubs on Friday and Saturday nights.
“People have a right not to expect bellowing in the street. We want it to be civilised,” he said.
According to Mr Mahabadi, there needs to be more street presence of police, but that needs funding. He said Labour would create payback orders – offenders repairing damage.
Non-drinker Mr Wilshire said binge drinking was a national issue and he wants to see both the price of cheap supermarket booze and police presence increased.
Mr Parsons said the work of street pastors was good, but clearly not enough.
“We need to listen to people who have seen changes over past ten years and deal with it.”

The questioner claimed people want to leave the area because of the effect of immigration.
Later, Mr Wilshire said: “This is a generational issue. I don’t see in the long run how it’s going to be a problem as [immigrants] adopt our values.”

In another question, Conservative district councillor Rodney Grocock asked the panel: “How and why do you take pride in South Holland?”
Only two of the candidates live in the district.
Mr Smid, who doesn’t, was born in the Czech Republic and said he chose to be British and is proud to be so.
Mr Mahabadi said: “I lived in this beautiful constituency until November last year. It’s so wonderful to see the golden colours of the rapeseed, and the skies. It’s always buzzing here.”
A heckler asked Mr Mahabadi – a full-time worker – why he didn’t live here now, to which he quickly replied “poor public transport”.
Mr Hayes claimed his pride came from “the wonders of our area”, adding: “But it’s more about the people – unpretentious and plain speaking. And so am I.”
There was applause for Mr Wilshire when he said he was proud to tell uni friends he was from “flat lands and you can see for miles around”.
He added: “It’s such a great place to live and people should come and join us.”

During a question about any regrets which candidates had, Mr Parsons, who admitted to having too many regrets to mention, came under fire for a debt to Leicestershire County Council which he later cleared.
Mr Hayes said: “I regret voting against the minimum wage when it was first introduced. I think my party got it wrong and I got it wrong.”
Mr Smid’s regret: “I wish I had come to this country a little earlier. Of all the ones I’ve lived in, this is the best, I’m pleased the country accepted me.”
At his age, Mr Wilshire said a question about regrets was a tough one and he should perhaps be asked again before the next General Election!

Tagged with: John Hayes South Holland and The Deepings