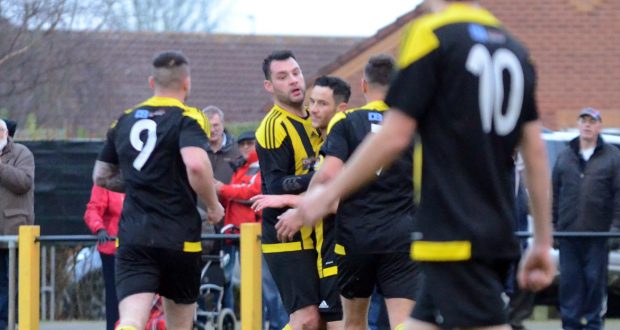 THREE-SY DOES IT: Holbeach United cruised past St Andrews. Photo by JAKE WHITELEY

Three first-half goals fired Holbeach United to a convincing victory over St Andrews on Saturday as they moved back into second place in the ChromaSport UCL Premier Division table.

A close-range header from Lewis Leckie (30), Danny Brooks’ classy curled effort (34) and Joe Smith’s sweetly-hit strike (45) got the job done for the Tigers at Carter’s Park as they maintained their unbeaten home record.

St Andrews, to their credit, shored things up after the break and limited the hosts to a handful of half-chances – but Holbeach were clearly in cruise control.

Satisfied boss Seb Hayes felt his team did everything asked of them after a busy festive period, but singled out on-loan Lincoln United midfielder Brooks for special praise.

Hayes hopes that the left-footer, whose delivery and all-round game was exceptional all afternoon, may stay with his side a little longer – but accepts that it’s not his decision.

Hayes said: “It was a good first half from the lads, but a sloppy second half.

“The game was won by half-time, though, so I’d rather we had an off half in a game that is already over as opposed to in a tight one.

“At some point, the intensity was always going to drop because of the run of three games in seven days we’ve just been through.

“I think we could have scored six or seven goals in the first half, but it did peter out after the break.

“I think they (St Andrews) had kind of settled for losing 3-0 and didn’t want to concede again – and, to be fair to them, I thought they played well defensively.

“I don’t think Ricky Drury had more than one save to make, so we were always comfortable.

“When you’re bad – and I don’t think we were really bad in the second half – it’s good when you don’t concede. That’s all you can ask for.

“Before the game I asked the lads for a clean sheet, three points and to move up to second.

“The lads gave us everything we asked for. And, when you take into account the players we had missing, you can see that there’s a lot we can achieve with this squad.

“I’ve not got a lot more to say about the game, but I would like to add that Danny Brooks was outstanding for us.

“I know he’s enjoying it here and we’d love to keep him, but that’s not up to us at the moment.

“We’ve just got to respect what Lincoln United want. If they’re happy for him to come here, we’ll take him with open arms.

“He’s got fitter and fitter every game. At this level, if you give him time on the ball, he’ll kill teams.

“He’s been brilliant and has done all of the things he said he could do for us. I call him Ronseal, because he does exactly what it says on the tin!

“He’s fitted in really well and I hope we can keep him, we’ll just have to wait and see. We’d take him in a heartbeat.”

Fresh off his early goal against Newport Pagnell, Holbeach’s leading scorer Leckie almost had the ball in the net inside 15 seconds on Saturday – but his header was kicked off the line.

Will Bird then forced a sprawling save from Rob Peet after heading Spencer Tinkler’s cross towards the far corner.

Striker Bird, who endured a frustrating day in front of goal, then slotted a better chance over the bar after cleverly beating a man on the edge of the box.

Brooks, who produced a catalogue of terrific dead-ball deliveries into the box, then picked out the head of Tinkler – only for the right-back to send his header wide of the far post.

You sensed a goal would surely come as the hosts piled on the pressure, but a clean through Bird saw his low effort saved by the legs of Peet when it seemed certain he’d net.

Bird did play a big role in the eventual opener, however, showing great persistence to rescue a seemingly lost cause and lay on the opener for Leckie – who headed home from close range in typical predatory fashion.

No sooner had the opener arrived then Brooks doubled Holbeach’s money with the pick of the afternoon’s goals. He curled home a sensational left-footed effort into the far top corner from the right-side of the field, giving Peet no chance.

It was pretty much game over in the final minute of the half when Smith, who had a great game at centre-back, rifled home a fierce drive from close range following another Brooks corner.

The chances didn’t flow as freely after the interval, but when they did Peet was on-hand to save the visitors.

He got down well to keep out Tinkler’s back-post drive, while also sticking out a leg to deny the luckless Bird after a probing run on the left.

Leckie was also denied by the on-song stopper after racing onto a Bird pass and firing in a low drive.

St Andrews skipper Ryan Hodgkinson threatened a few times in each half after finding pockets of space on the left, but it was a largely uneventful afternoon for Tigers keeper Ricky Drury as his side eased to a relatively routine win.

You sense he’ll be tested a little more in Tuesday night’s UCL Knockout Cup semi-final at Yaxley, but Holbeach will be boosted by the return of Charley Sanders.